DYKE A Quarterly
Home Facebook About DYKE
From The Vault: Our Notepads
What The Well Dressed Dyke Will Wear: The Lesbian History Exploration,1975.

What The Well Dressed Dyke Will Wear: Amazons

Before there was DYKE, A Quarterly, there was COWRIE, Lesbian/feminist. It started off as the publication of a local women's group in New York City, Community of Women, COW. Although Community of Women was not strictly a Lesbian group, COWRIE quickly became a Lesbian magazine, independant of COW, taken in this direction by the editors, Liza Cowan and Carol Hardin.

It was here that Liza Cowan's series, What The Well Dressed Dyke Will Wear originated. Vol. 1 #4 was the Amazon issue, with cover of Amazons and inside, the essay on Lesbian Clothing. Here it is, the original text and graphics: 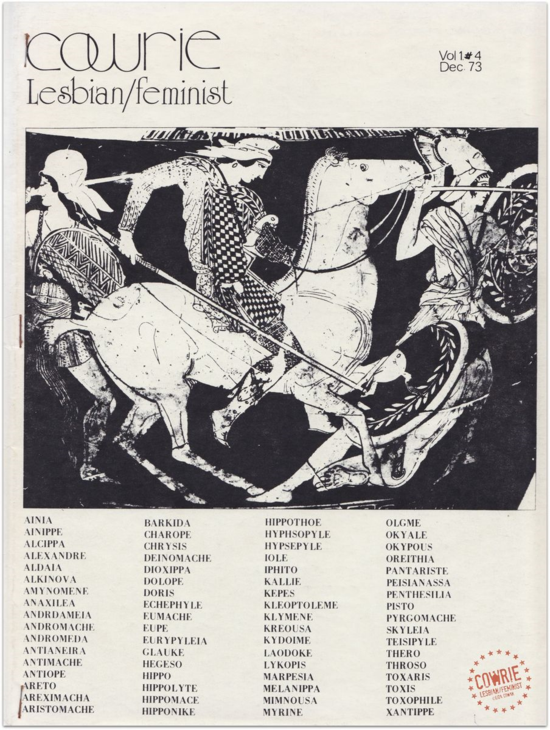 Look at Greek vase paintings in a book or at a museum, you can always spot an Amazon by the way she looks. Greek patriarchal women are very femme, they wear loose, flowing chitons and are very nice to the men who share their space on the vases. The Amazons wear bold, striking pants, tunics and weapons, and are busy killing the men.

I spent a lot of time last week tracking down Amazon clothes. The Metropolitan Museum Clothing Institute had nothing. No hints, no leads. A curator at the American Museum of Natural History told me that Amazons never really existed. Katherine Springer of the Greek and Roman department at the Metropolitan Museum was helpful. She told me about a book called Amazons In Greek Art by Deitrich Von Bothmer, which I got at the library and had to spend an hour just figuring out how to read it.  I called her back to ask a question, which she answered, and handed the phone over to her boss, none other than Deitrich Von. B. He told me he wouldn’t do my homework for me, that I obviously wasn’t an expert at anything, etc. etc. So here I am, back where I started, with a few feminist sources and some pictures of Amazons painted by Greek men.

It is incredible the way our heritage is denied us. I never studied about Amazons in school. My twelfth grade Ancient History textbook never even mentions them. In order to write about Amazon clothes I first have to bust my ass trying to find information about Amazons themselves, information which isn’t readily available, and what is available is mystified, obscured and held by men who don’t want to part with their precious knowledge. Information Imperialism! (There is one excellent book, Mothers and Amazons, by Helen Dinar) We should have learned about our Amazon foremothers before we learned about George Washington. We are never taught about women. Every book that mentions Amazons (excluding Dinar) says they were a mythological race of women. The concise English Dictionary calls them “ A fabulous race of women warriors, masculine women” Men cannot stand the idea that women preferred to live without them.

The Amazons were a strong, powerful group (or groups) of women identified women who lived according to their own determination, without men. They were forced to fight for survival against a growing patriarchy. Their existence has been documented as early as 1760 BC, when Queen Euripyle captured the Amorite capital in Babylon. They lived in many different places, migrating frequently, conquering new lands. There were Amazons all around the Mediterranean area, in southern Russia, north of the Black Sea, in Asia Minor and in northern Africa. There were two major groups, the Libyan (Libya being the place we now refer to as Morocco) and the Thermodontines. The only pictures of Amazons are those on Greek Vases (and some sculptures,) usually depicting the great war between the Athenians and the Thermodontine Amazons, whose territory extended from the Saramatian Planes to the Aegean Sea (which is roughly southern Russia, the Balkan countries, Greece and Asia Minor. This is the story of that war: In the 13th century BC, a group of Greek men (Heracles and Theseus, according to one version) sailed to Themiscyra, the Thermodon capital on the southeastern coast of the Black Sea, to steal the belt of Hippolyte, the Queen. It was a gold and crystal sword belt, one of the Scythian insignia. It symbolized virginity, which meant unmarried rather than unfucked. It was more than the belt they were trying to steal. Patriarchy was trying to conquer and dominate Matriarchal authority. Stealing the belt was a symbol of this intended domination. If Amazons surrendered their virginity, they surrendered their independence, as every Lesbian/feminist knows.

At any rate, the Greek men fell upon the undefended city and its Queen, while the other Queen was away defending the borders with her army.

Amazons always had two Queens, one to administer and one to lead the armies. The men stole the belt, killed the remaining townswomen, and abducted Antiope, Hippolyte’s sister. When Oriethia heard the news, she came rushing back, but the men had already left, so she led her army to invade Athens.

They besieged the Acropolis, but were not victorious. Antiope (and maybe Hippolyte) fought alongside the Greek men, and the war ended with a compromise. Oriethia died of grief and shame. Few of the remaining Amazons every reached home again. They were discouraged and almost totally defeated.

This war is the one that is usually portrayed on the Greek vases. Some others show the Amazons, led by Penthesilea, fighting the Greeks in the Trojan War. The earliest vase paintings were done in the 7th Century BC, most were done in the 5th Century BC, eight hundred years after the Thermodontine-Athenian War. But clothing styles didn’t change as rapidly as they do now, so there’s a good chance that the Amazon clothes depicted on the vases are accurate.

There is no one Amazon clothing style. The clothes change with place of origin, but there was much migration and communication between locations. The most striking clothes are those that come from Asia Minor, around modern Turkey, near the Amazon capital, Themiscyra. They wore an outfit that looked like a body suit covered by a tunic. The front and back pieces were oblong, sewn together on the shoulders and down the sides, with openings left for the arms. There was a single seam in the arms sewn on the undersides. These coats were usually made of leather, and sometimes wool. They wore tight fitting knit hose with bold geometric designs, checkerboards, stripes, circles, stars and zigzags. 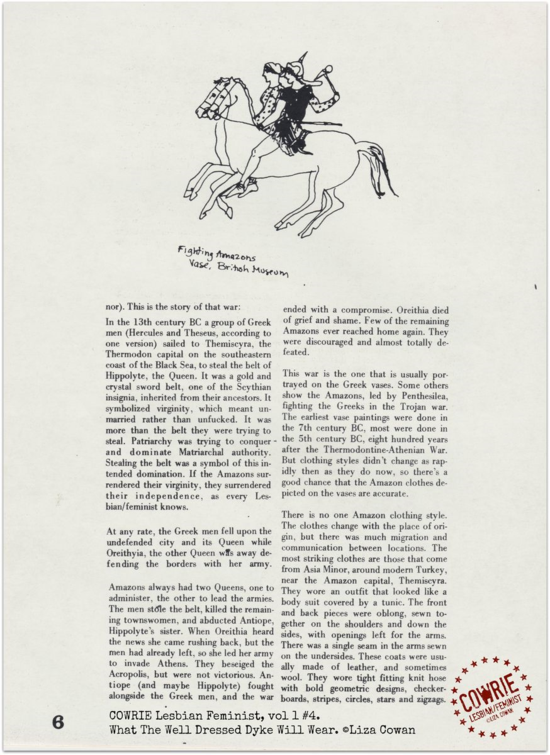 Some sources say that the Amazons were tattooed on their arms and legs, but this is unlikely. The shirts and tunics had tight sleeves, close fitting at the wrists, and were also boldly patterned with geometric designs. They frequently wore long soft red leather boots. The toes of the boots were often curled up, indicating a northern origin. Shoes like this are usually worn in snowy, rocky climates.

They wore a variety of hats and helmets. One popular hat was from Phrygia (150 miles due east of Lesbos.) This was a tall conical cap, knitted in one piece or made of felt. It had a broad flap which hung over the nape of the neck and two other flaps which came to the shoulders and could be tied.

In battle the Amazons carried crescent or double crescent shaped shields, emblems of the Moon Goddess, and they frequently wore the crescent emblem on their helmets. They carried bows and arrows, darts, javelins, nets and, of course, the Labyris, double-edged axe, symbol of the matriarchy. They wore armor made of red leather, and sometimes were greaves, armor for the shin area. Some pictures show them wearing no trousers, though I doubt that any self-respecting Amazon would ride into battle without her pants. She would be too vulnerable.  Some pictures show them wearing earrings. Their hair is shown tied back, or is hidden by the helmets.

There are no pictures of Amazons alone with each other, having fun, making love, eating, sleeping, building houses, training horses, playing with the children, or doing anything else but fighting. After all, men were not allowed to hang out with the Amazons so the only way they would have been able to see them was in combat. There are no remnants of Amazon art or artifacts (that I have found, anyway.) Probably everything was destroyed.

Amazons were our great, great, great grandmothers. The patriarchy almost defeated them, but not quite. Here we are, the North American Amazons. Long live the Amazons.

Mothers and Amazons – Helen Dinar (available in paperback) The best book about Amazons so far.

Les Guerilleres,  Monique Wittig (paperback) not specifically about Amazons but gives, I think, a sense of an Amazon Community. 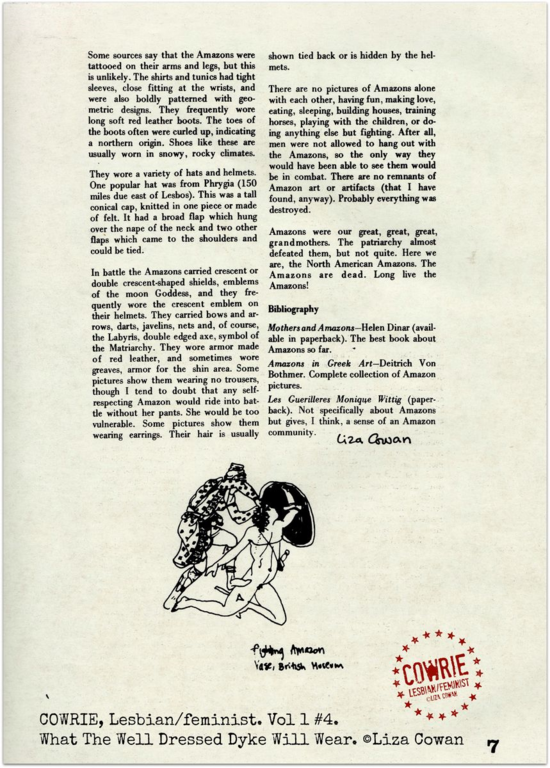