DYKE A Quarterly
Home Facebook About DYKE
DYKE A QUARTERLY Issue No. 3, 1976. pp 44,45 Emotional Life Insurance
DYKE A Quarterly, No.3, p. 32 In Order Of A Name Change by Moon 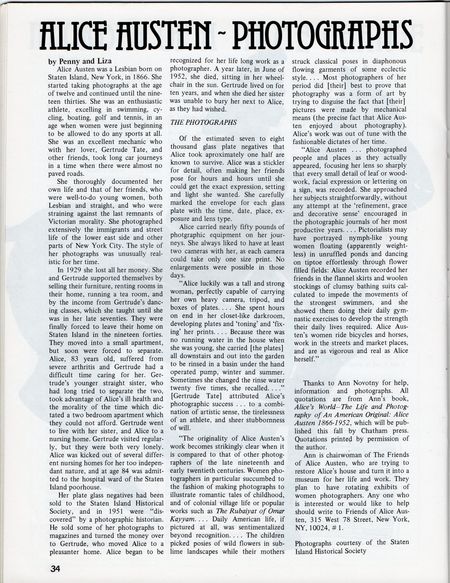 By Penny and Liza

Alice Austen was a Lesbian born on Staten Island, NY in 1866. She started taking photographs at the age of twelve and continued until the nineteen thirties. She was an enthusiastic athlete, excelling in swimming, cycling, boating, golf and tennis in a n age when women were just being allowed to do any sports at all. She was an excellent mechanic who with her lover, Gertrude Tate, and other friends, took long car journeys in a time when there were almost no paved roads. 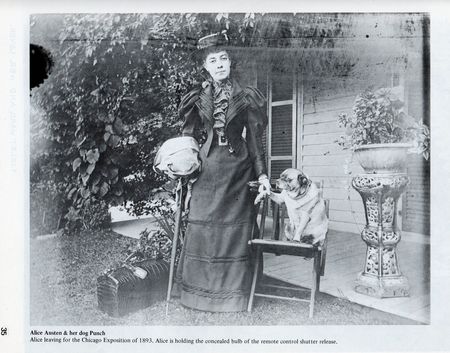 Alice Austen and her dog Punch. Alice leaving for the Chicago Exposition of 1893. Alice is holding the concealed bulb of the remote shutter release. DYKE A Quarterly No. 3 p 37

She thoroughly documented her own life and that of her friends, where were well-to-do young women, both Lesbian and straight, and who wer straining against the last remnants of Victorian morality. She photographed extensively the immigrants and street life of the lower east side of New York City. The style of her photographs was unusually realistic for her time. 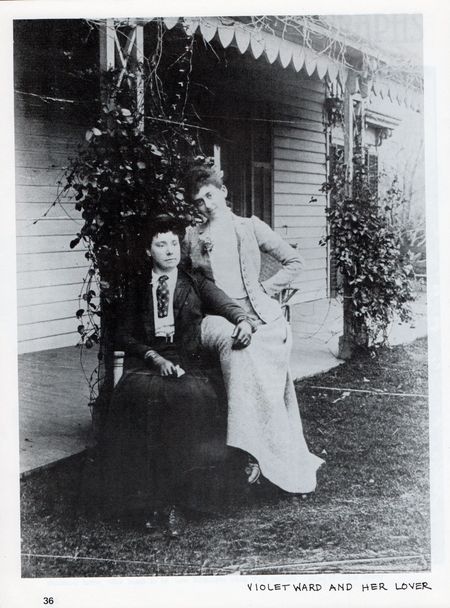 Alice Austen Photo. Violet Ward and her lover. DYKE A Quarterly, no. 3 p 36

In 1929 she lost all her money. She and Gertrude supported themselves by selling their furniture, renting rooms in their home, running a tea room, and by the income from Gertrude's dance classes, which she taught until she was in her late seventies. They were finally forced to leave their home on Staten Island in the nineteen forties. They moved into a small apartment, but soon were forced to separate. Alic, 83 years old, suffered from severe arthritis and Gertrude had a difficult time caring for her. Gertrude's younger straight sister, who had long tried to separate the two, took advantage of Alice's ill health and the morality of the time which dictated a two bedroom apartment which they could not afford. Gertrude went to live with her sister and Alice to a nursing home. Gertrude visited regularly, bu they were both very lonely. Alice was kicked out of several different nursing homes for her too independent nature, and at 84 was admitted to the hospital ward of the Staten Island poorhouse.

Her plate glass negatives had been sold to the Staten Island Historical Society, and in 1951 were "discovered" by a photographic historian. He sold some of the photographs to magazines and turned the money over to Gertrude, who moved Alice to a pleasanter home Alice began to be recognized for her life long work as a photographer. A year later, in June of 1952, she died, sitting in her wheelchair in the sun. Gertrude lived on for ten years, and when she died her sister was unable to bury her next to Alice, as they had wished. 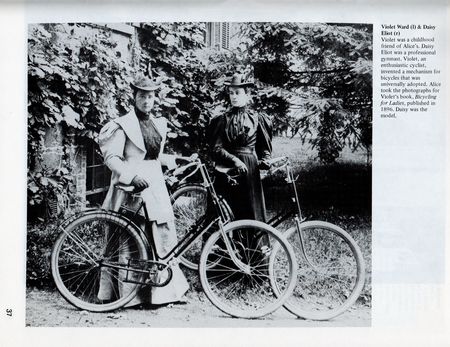 Violet Ward and Daisy Eliot. Photo by Alice Austen. Violet was a childhood friend of Alice's. Daisy Eliot was a professional gymnast. Violet, an enthusiastic cyclist, invented a mechanism for bicycles that was universally adopted. Alice took the photographs for Violet's book, Bicycling for Ladies, published in 1896. Daisy was the model. 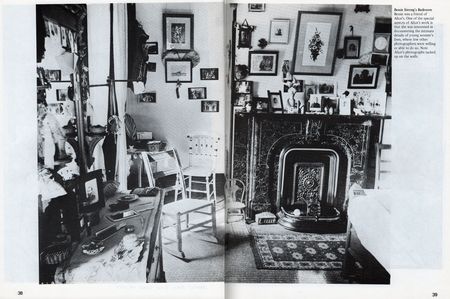 Bessie Strong's Bedroom. Bessie was a friend of Alice's. One of the special aspects of Alice's work is that she was interested in documenting the the intimate details of young women's lives, where few other photographers were willing or able to do so. Note Alice's photographs tacked up on the walls. DYKE A Quarterly No 3, 1976

Of the estimated seven to eight thousand glass plate negatives that Alice took, approximately one half are known to survive. Alice was a stickler for detail, often making her friends pose for hours and hours until she could get the exact expression, setting and light she wanted. She carefully marked the envelope for each glass plate with the time, date, place, exposure and lens type. 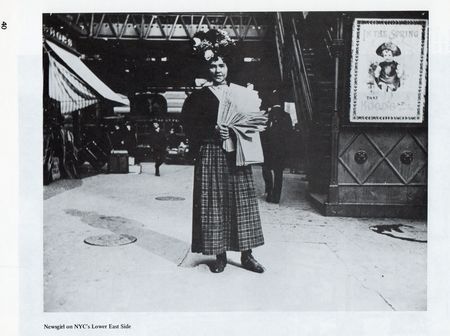 Alice Austen, Newsgirl on NYC's Lower East Side. DYKE A Quarterly No 3, 1976

Alice carried nearly fifty pounds of photographic equipment on her journeys. She always liked t have at least two cameras with her, as each camera could take only one size print. No enlargements were possible in those days.

"Alice luckily was a tall and strong woman, perfectly capable of carrying her own heavy camera, tripod, and box of plates...She spent hours on end in her closet -like darkroom, developing plates and 'toning' and 'fixing' her prints...Because there was no running water in the house when she was young, she carried [the plates] all downstairs and out into the garden to be rinsed in a basin under the hand operated pump, winter and summer. sometimes she changed the rinse water twenty five times, she recalled. Gertrude Tate attributed Alice's photographic success to a combination of artistic sense, the tirelessness of an athlete, and sheer stubbornness of will." 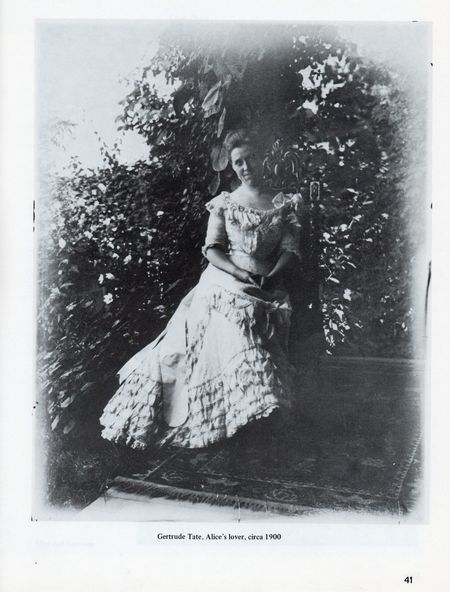 "The originality of Alice Austen's work becomes strikingly clear when it is compared to that of other photographers of the late nineteenth and early twentieth centuries. Women photographers in particular succumbed to the fashion of making photographs to illustrate romantic tales of childhood, and of colonial village life or popular works such as The Rubiayat of Omar Kayyam... Daily American life, if pictured at all, was sentimentalized beyond recognition. The children picked posies of wild flowers in sublime landscapes while their mothers struck classical poses in diaphanous flowing garments of some eclectic style...most photographers of her period did [their] best to prove that photography was a form of art by trying to disguise the fact that [their] pictures were made by mechanical means -the precise fact that Alice enjoyed about photography. Alice's work was out of tune with the fashionable dictates of her time. "Alice Austen...photographed people and places as they actually appeared, focusing her lens so sharply that every small detail of leaf or woodwork, facial expression or lettering on a sign, was recorded. She approached her subjects straightforwardly, without any attempt at the refinement, grace and decorative sense encouraged in the photographic journals of her most productive years...Pictorialists may have portrayed nymph-like young women floating apparently weightless in unruffled ponds and dancing on tiptoe effortlessly through flower filled fields: Alice Austen recorded her friends in the flannel skirts and woolen stockings of clumsy bathing suits calculated to impede the movements of the strongest swimmers, and she showed them doing  their daily gymnastic exercises to develop the strength their daily lives required. Alice Austen's women ride bicycles and horses, work in the streets and market places and are a vigorous and real as Alice herself." Thanks to Ann Novotny for help, information and photographs. All quotations are from Ann's book, Alice's World - The Life and Photographs of An American Original: Alice Austen 1866-1952, which will be published this fall by Chatham press. Quotations printed with permission of the author.

Cover photo. Alice and her friends, Trudy, Julia and Sue formed a cooking and sewing club. "The four girls spent so much time in each others company that disgruntled young men referred to 'the darned club,' a name the members delightedly adopted." Alice is on the left, once again holding the remote control shutter release.

Ann is chairwoman of The Friends Of Alice Austen, who are trying to restore Alice's house and turn it into a museum of her life and work. They plan to have rotating exhibits of women photographers. Anyone who is interested or would like to help should write to Friends of Alice Austen, 315 W. 78 Street, New York, Ny 10024 #1, 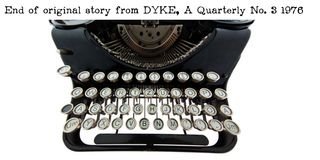 See more about creating the cover for issue No.3. using Alice's photo That Darned Club, here 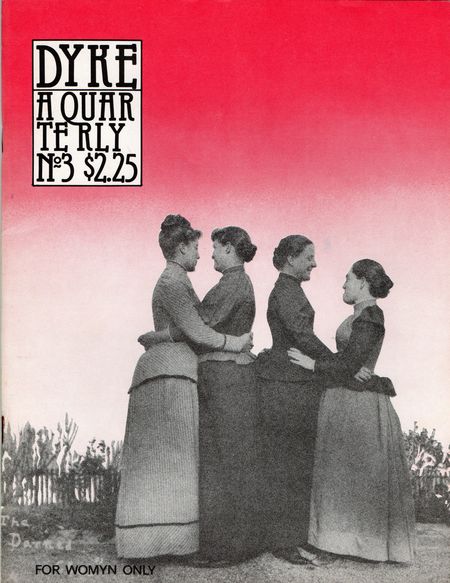 DYKE A Quarterly, No. 3. Photo That Darned Club by Alice Austen 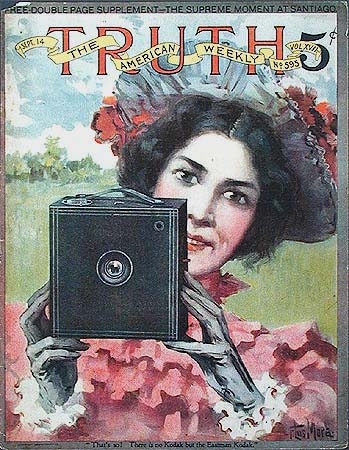 For more on women and photography at the turn of the last century try this wonderful blog, Kodak Girl. Kodak invested heavily in marketing their cameras to women, quite successfully. 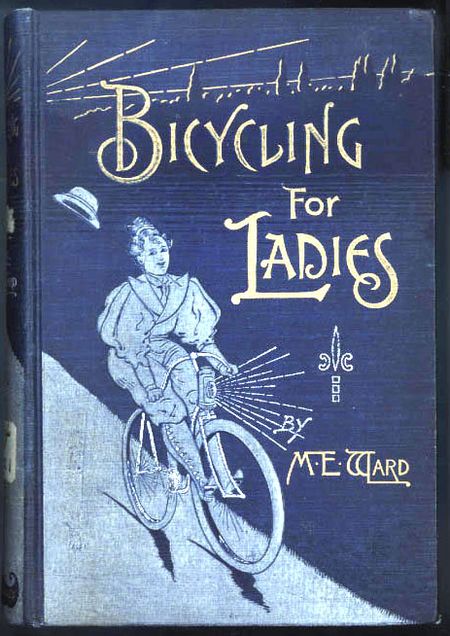 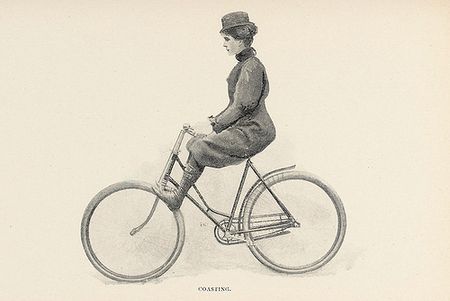 How To Coast. Illustration from Alice Austen photo in Bicycling for Ladies by ME Ward. 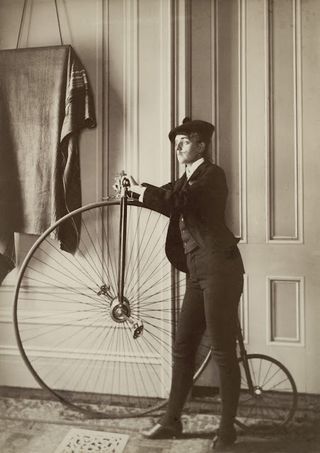 Frances Benjamin Johnston, American photojournalist, took this self portrait with a bicycle. Johnston wrote What A Woman Can Do with a Camera for the Ladies Home Journal in 1897, a year after Bicyling For Ladies was published. Notice the painted on moustache. The ladies did like to lark about.

The Alice Austen House Website is gorgeous and filled with great photos and information. Do CHECK IT OUT