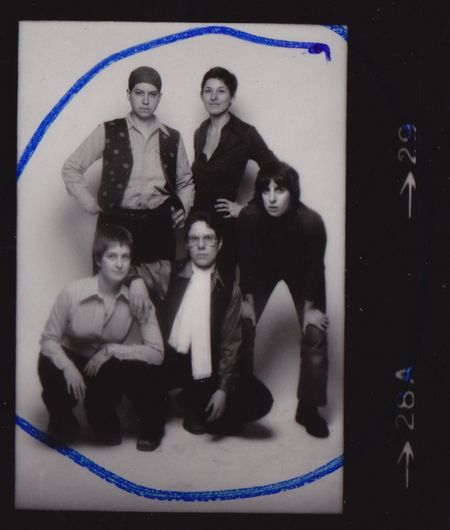 When we decided to publish a magazine, we decided that it would be as beautiful and slick as we could make it. This was in direct contradiction to almost all other feminist, gay, Lesbian and small press periodicals of the time. Our readers were baffled, trained as they were to believe that good design was the province of "the man" and  "the enemy."

We believed that we deserved nothing but the best, so that's what we tried to provide.

For this photo shoot for our first flier, we went to the studio of the lover of one of our friends. It was her father's studio, but she worked as an apprentice. We were excited to pose on a big roll of seamless paper, and we were even more excited by the results. Our printing options at the time limited the clarity of the image in the final product, so we were excited to find the contact sheets from the shoot as we were preparing our archive.

As with all our design work, the process was laborious. Probably we made photocopies of an 8x10 photo print and used Letraset  dry transfer letters to form the text. To print it we found a copy shop that had two women workers. Those women went on to found Tower Press, an all women print and graphics company that grew to annual sales in excess of $1.2 million with a technical staff of 24 people.