FINANCIAL LITERACY - NO TIME TO BUDGET?

I'm not a financial expert of advisor. These are just some things I've learned. 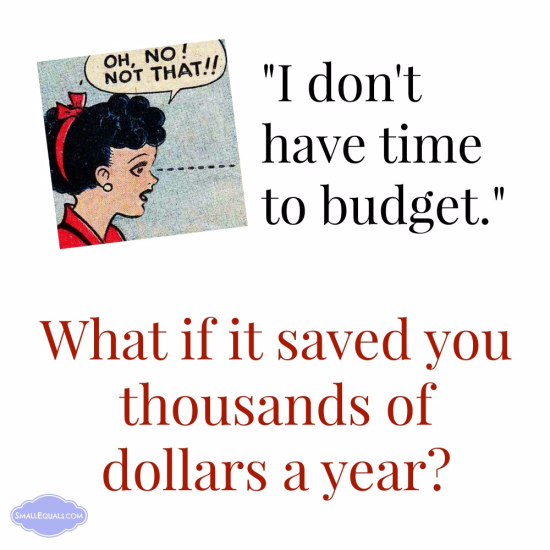 I started keeping a budget in July of 2015. I learned how to by reading books, blogs and online articles. .

I have saved thousands of dollars by having a plan, a roadmap, a blueprint. By cutting out things I don't need or can't afford. By spending less than I earn. By making sure I pay myself first, in my money market savings account. By learning how to say "no" and when to say "yes."

I don't have any debt - I've always been debt averse and rarely borrowed without definite a plan for a pay back date.

But for people who do have debt - how much of your money are you basically just giving to the bank by not paying down your debt?

The only way to get a grip on your money is to have a plan. Think if the money you will save! Is that worth your time? You bet!

These days, I am loving the online budget tracker from everydollar.com. It's free, and so easy to use. 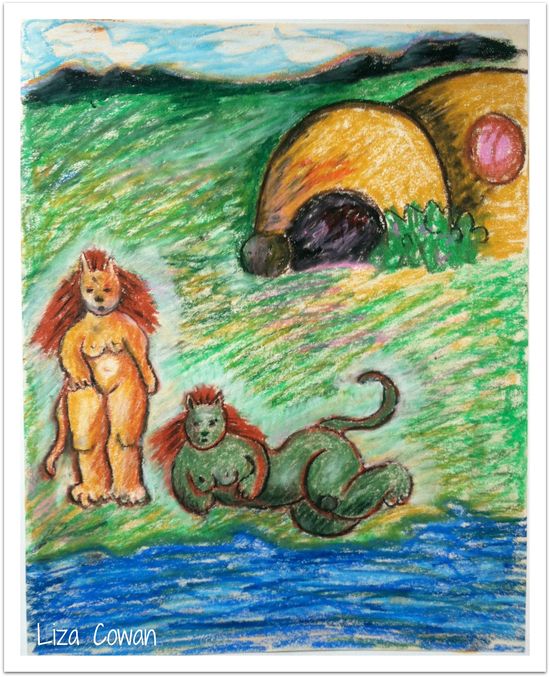 Way back in 1989/90 I studied Art Therapy with Dr. Erika Steinberg at The New School For Social Research in New York City. Dr. Steinberg had us all keep extensive journals of drawing exercises, dream and meditaion notes, and the process of drawing. It was an amazing class, with some extraordinary students, including a gifted and now- famous psychic/intuitive practitioner who subsequently became a best selling author, but during that year was just beginning her career, and, for those two semesters, was a good buddy of mine. Her insights amplified our work in many ways.  The class met twice a week for two semesters, and it was the environment in which I rediscovered how much I liked drawing and the process of making art.

I chose not to become an art therapist, but the techniques of dream work and art therapy clung. I was reminded of this last night as I was listening to a radio broadcast that, almost in passing, mentioned feline guardian beings and goddesses. Of course, cats were goddesses in ancient Egypt and around the world, but I don't think I was thinking about them as I began this small series. Not consciously at any rate. The images came from dreams and meditation.

In our art journals, Dr. Stienberg had us keep notes, short ones, on three things: Environment, Process and Product. That is, what we were feeling and the physical space we were in while we were drawing, how we made the drawing, and a description of the work itself. 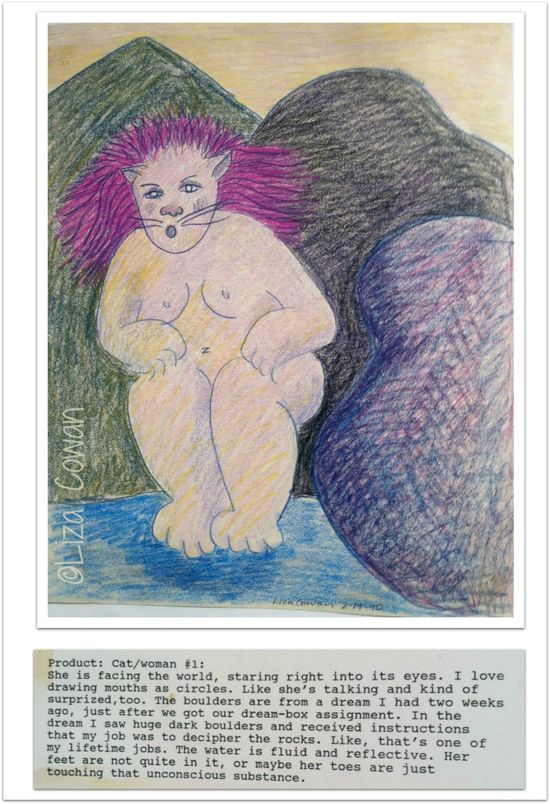 She is facing the world, staring right into its eyes. I love drawing mouths as circles. Like she's talking and kind of surprised, too. The boulders are from a dream I had two weeks ago, just after we got our dream-box assignment. In the dream I saw huge dark boulders and received instructions that my job was to decipher the rocks. Like, that's one of my lifetime jobs. The water is fluid and reflective. Her feet are not quite in it, or maybe her toes are just touching that unconscious substance. 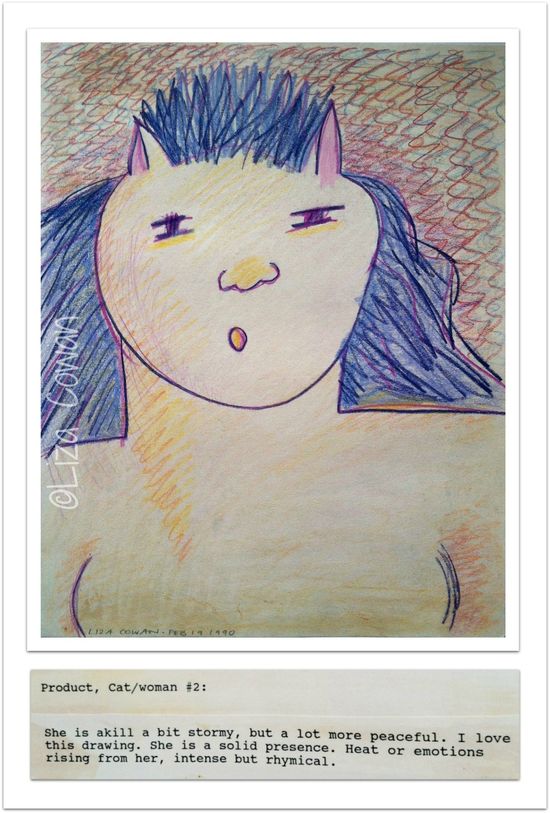 She is still a bit stormy, but a lot more peaceful. I love this drawing. She is a solid presence. Heat or emotions rising from her, intense but rhythmical. 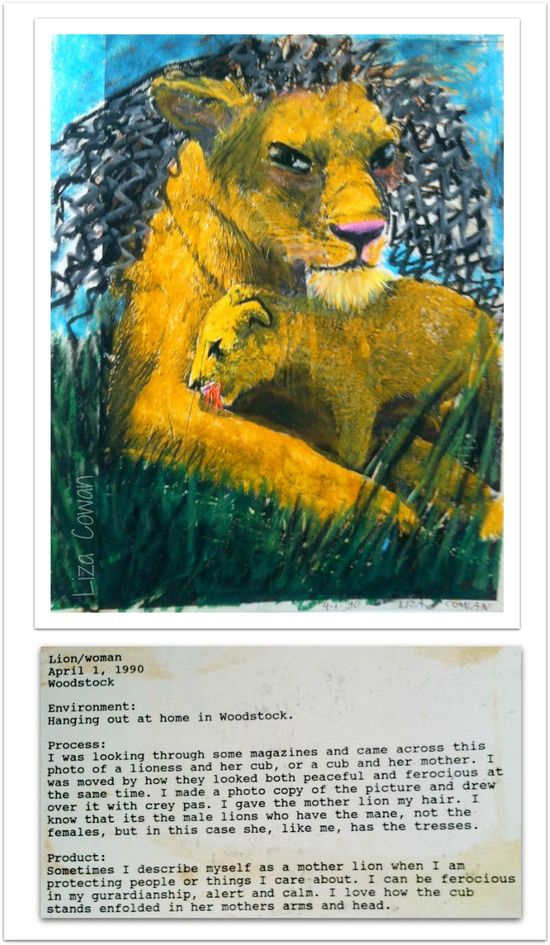 Environment: Hanging out at home in Woodstock

Process: I was looking through some magazines and came across this photo of a lioness and her cub, or a cub and her mother. I was moved by how they looked both peaceful and ferocious at the same time. I made a photo copy of the picture and drew over it with cray pas. I gave the mother lion my hair. I know that it is the male lions who have the mane, not the females, but in this case she, like me, has the tresses.

Product: Sometimes I describe myself as a mother lion when I am protecting people or things I care about. I can be ferocious in my guardianship, alert and calm. I love how the cub stands enfolded in her mothers arms and head.

The following drawing is from a week before the first cat drawings. I believe that the animals in this dream either were, or became, the cat figures in the subsequent images. 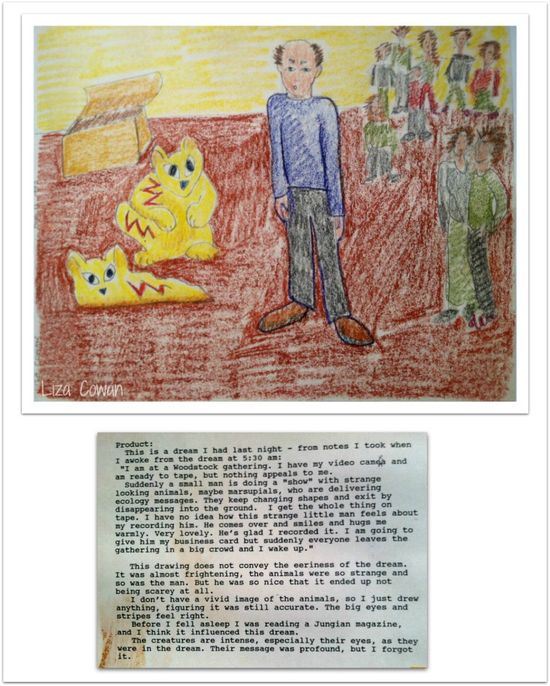 Product: This is a dream I had last night - from notes I took when I awoke from the dream at 5:30 am:

"I am at a Woodstock gathering, I have my video camera and am ready to tape, but nothing appeals to me.

Suddenly a small man is doing a "show" with strange looking animals, maybe marsupials, who are delivering ecology messages. They keep changing shapes and exit by disappearing into the ground. I get the whole thing on tape. I have no idea how this strange little man feels about my recording him. He comes over and smiles and hugs me warmly. Very lovely. He's glad I recorded it. I am going to give him my business card but suddenly everyone leaves the gathering in a big crowd and I wake up."

This drawing does not convey the eeriness of the dream. It was almost frightening, the animals were so strange and so was the man. But he was so nice that it ended up not being scarey at all.

I don't have a vivid image of the animals, so I just drew anything, figuring it was still accurate. The big eyes and stripes feel right.

Before I fell asleep I was reaing a Jungian magazine and I think it influenced ths dream.

The creatures are intense, especially their eyes, as they were in the dream. Their message was profound, but I forget it."