Remember back in the day before the internet, before personal computers? Today we click a link and we've sent a letter to our congresspeople, signed a petition, joined a fan club. But then we wrote letters. At least, I did.

I used to write to my Senators about matters of policy. But mostly I wrote to my favorite authors, entertainers and TV shows. I also used to make phone calls before people worried about stalkers. That's how I got to be friends with Andy Warhol when I was in 11th grade, in 1966. But that's another story.

I have managed to hang on to several of the responses I got to my letters. Back in those pre internet days, it was rare to have copy machine so we relied on carbon paper. If I made carbons of the letters I don't have them.

Like many people of my generation, I was opposed to the War in Vietnam. I was, and am, opposed to war in general, but that was the conflict of the era and I wanted some answers. I was three weeks shy of sixteen years old and nearing the end of tenth grade when  I wrote a letter to my Senator, Robert F. Kennedy. Here is his hand typed and, I believe, hand signed reply: 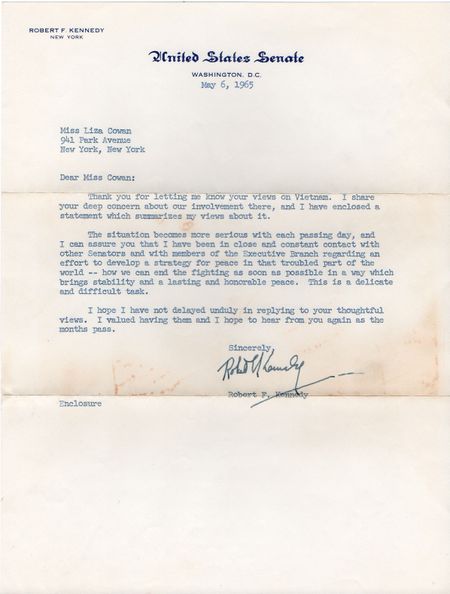 Thank you for letting me know your views on Vietnam. I share your deep concern about our involvement there, and I have enclosed a statement which summarizes my views about it.

The situation becomes more serious with each passing day, and I can assure you that I have been in close and constant contact with other Senators and with members of the Executive Branch regarding an effort to develop a strategy for peace in that troubled part of the word -- how we can end the fighting as soon as possible in a way which brings world stability and a lasting and honorable peace. This is a delicate and difficult task.

I hope I have not delayed unduly in replying to your thoughtful views. I valued having them and I hpe to hear from you again as the months pass.sincerely

The War in Vietnam lasted until 1975.

Your comments are always welcome.