Writing letters to people I admired became a kind of habit for me in my young, pre computer, pre-internet years. While I sometimes wrote to elected officials about pressing issues, mostly I was consumed with pop culture and the fuzzy boundaries of pop culture and fine art. Hmmm...guess I haven't changed much.

The great thing about writing letters to people, unlike sending emails, is that sometimes they write back. And you have a genuine piece of history in your hands. There's just nothing that exciting about saving a print out of an email, but a letter on someone's stationery: a thrill and an artifact.

In this  example, I didn't actually write to Lily Tomlin - she wrote me me in a response to a review I review I wrote in the New York City newspaper, The Village Voice.

Lily had been on the TV Show Laugh  In since 1969. I was a big fan of Lily and Laugh In. In 1973 I was writing  occasional free lance reviews for The Village Voice, and seized the opportunity to see her one woman show in NY at The Bitter End. I was smitten.

Review of Lily Tomlin at The Bitter End, February 1, 1973

"Last night I saw Lily Tomlin at The Bitter End. She was so wonderful that I haven't stopped thinking about her. Every so often she stands back, looks calmly at the audience, then move on. She's in perfect control. At one point she fell down on the floor and lay there for a few minutes saying nothing, just looking at us, then said, "I see you're all still in your seats.""Part of her beauty is that she's not afraid to make herself look ugly, to identify herself with the most grotesque characters: she's an an aging beauty expert, mouth falling down into her chin, who reveals her secret beauty regime; she's Ernestine, the pushy switchboard operator from Ma Bell who contorts her face and body...She's a a gum snapping 1950's teenager at a dance talking to her girlfriend waiting to ba asked to dance; she's an alcoholic ex-rubber addict whose habit grew from pencil erasers to doorstops and rubber mats; she's a woman waiting on line at a redemption center watching another woman try to return a used cookie jar. Her characters remind me of diane Arbus Photographs."

Lily Tomlin. The publicity picture she gave me at the show. "Nobody likes a pushy woman. Keep pushing! To Liza and Alix. Love from Lily." Alix is the singer Alix Dobkin, my partner at the time. Alix has recently published her memoir My Red Blood, which includes fascinating stories about singing in the folk clubs, including The Bitter End, in Greenwich Village in the sixties.

Seeing Lily in person, in the intimate club atmosphere of The Bitter Endwas exciting enough. The fact that she took the time to write to me was even better. And look how the piece of mail had to travel to find me: click on a smaller image and it will enlarge 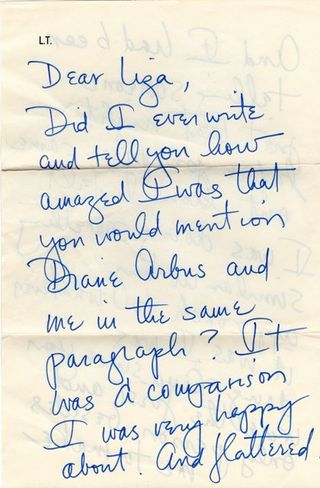 "Dear Liza, did I ever write and tell you how amazed I was that you would mention Diane Arbus and me in the same paragraph? It was a comparison I was very happy about. And flattered. And I had been telling someone just that night before your piece came out how I felt I was doing something similar in my approach to whatever it was I was doing. And since you were the first and only person besides me to make that observation and I think is is a good and interesting one, I want to mention the use of it in a piece done on me in "The New York Times" and tell you that we are on a couple of the same wave lengths. Love, Lily"

So my advice is not that you should write reviews, although you might, but to take the time to write a real letter, on real paper to the people you admire. One, they will appreciate it. Two, you never know what you will get back.

Next time I will show you  letters I got back from Bea Arthur and from Lorenzo Music from the show, Rhoda, after I wrote to them.  And you know I'm kicking myself for never writing to Soupy Sales.

PS: If you like reading historical letters, here's the website for you:  Letters Of Note, Correspondence Deserving Of A Wider Audience.  Endlessly fascinating.


I welcome your comments.