For you Zina Rachevsky fans - and you are legion: here's a wacky story from Confidential Magazine, July 1956. It's not really so much about Zina, but she is the connecting factor between two men, who may or may not have been involved with each other as well as with her. 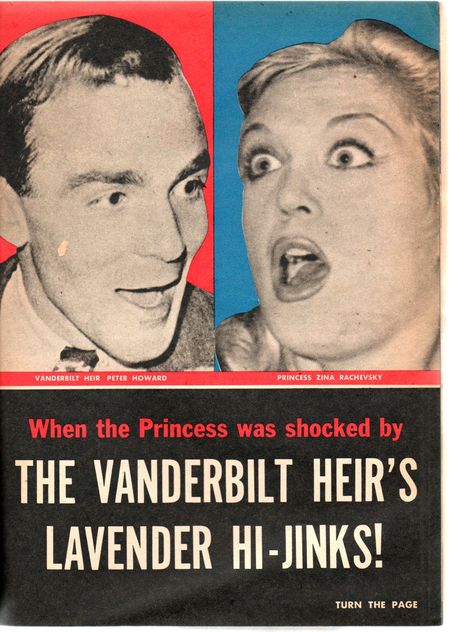 Scandal and intrigue, with our Zina caught in the middle of two suitors, one gay, the other straight.

"One night in Rome in 1953, a handsome young member of the exclusive Vanderbilt clan with international fame as a Romeo left his suite at the American Palace Hotel and tiptoed across the hall to another apartment. Once inside, he felt his way to the darkened bedroom and then slipped quietly into one of the twin beds.But a moment later there was pandemonium. With a roar of surprise, the blond Vanderbilt heir, Peter Howard, sat bold upright in the bed and snapped on a light. He stared incredulously for a moment at Princess Zina Rachevsky, the delectable dish beside him. the he leaped out of the bed covered only by comfusion and almost collided with a dark-haired Adonis who'd been slumbering in a twin bed across the room."

Turns out that Peter was actually after Liam. Peter and Zina had been engaged but theirs had been a platonic affair. Peter, of course, was gay.  Liam was Zina's new lover.

"... Peter had really hoped to share a pillow with Liam, but since Liam and Zina had switched sacks that night, the Vanderbilt clans gay deceiver had found curves when he had expected to find Liam..."

Peter had arrived in Rome a few weeks earlier to catch up with his ex (and platonic) fiancee Zina, who was staying in Rome with her new lover. The three palled around for a while

"After a few weeks of innocent fun with his playmates, Peter suggested a flying trip across the Mediterranean to Tunisa to catch the apperance of his sepia friend Hazel Scott at the Tunis Municipal Theater. Zina bowed out but she suggested that Liam keep Peter company on the jaunt. Liam agreed to go when Peter assured him it would be an all-expensed-paid vacation.

The fun-bent pair shepherded Hazel Scott around Tunis's late-hour spots for several nights when her chores at the keyboard were finished..."


Hazel Scott, Peter's "Sepia friend" was quite a phenomenon. Jazz pianist extraordinaire, "the darling of Cafe Society, "she had had a brilliant career with live performances, sound recordings  and in Hollywood films until she was blacklisted and moved to Europe.  She had been married to New York City congressman Adam Clayton Powell Jr..   The video above was one year before her rendezvous with Peter Howard and Liam Baker. Zina, alas, was not with them, but it's a fascinating detour.

After their trip to Tunesia Peter and Liam went off to El D'Jem, where more hijinks ensued. Boy chases boy, boy avoids boy, boy threatens to leave other boy without money stranded in the desert, boy gives in and etc etc. What really happened we do not know. But the two of them made it back to Rome, and that's when, according to the Confidential story, Peter snuck into the Zina and Liam's room, hoping to hop into bed with Liam. Again. Or not. 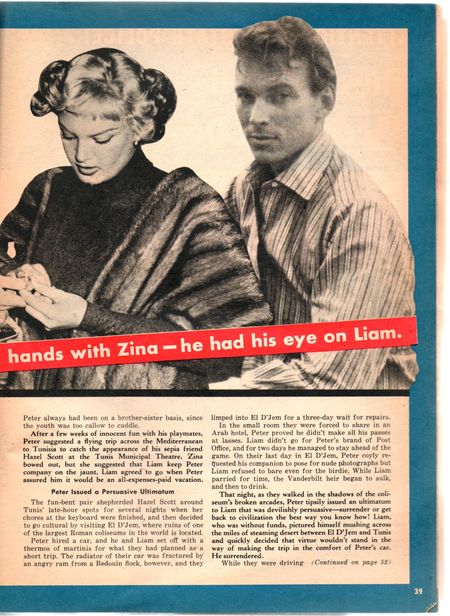 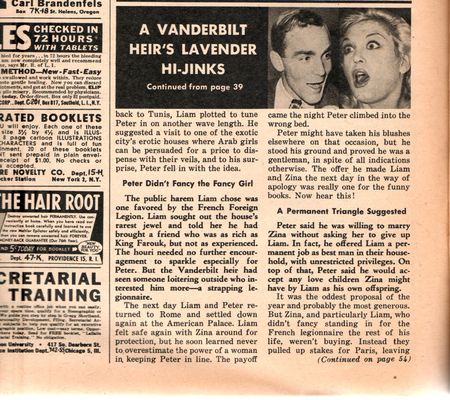 After climbing into the wrong bed, Peter Howard suggested a marriage Blanche with Zina, "without asking her to give up Liam" They declined. And left for Paris. Peter soon persued Christine Jorgensen, but apparently she wasn't interested either.

Maybe some of you Zina fans and friends who were around her those days will be so kind as to write and fill in some details.