It seems clear that President-Elect Barack Obama has inspired more and better art than any previous America political candidate or victor, but political imagery and ephemera is not a new category for  collectors. I started collecting campaign buttons in the early sixties - most of which I regret that I no longer have. But fliers, posters, celluloid buttons and other propaganda is a fertile ground for art collectors and cultural/political historians.

Campaign buttons have long been a popular way to market candidates. George Washington and many of his supporters wore brass clothing buttons reading "G.W. - Long Live The President" at his inauguration in 1789. 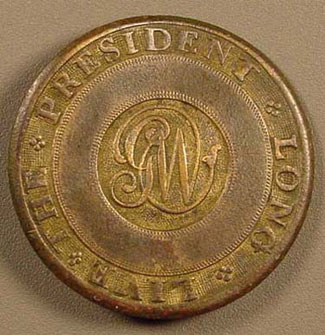 In a  marketing strategy that continues to this day, William Harrison sold himself as a man the common people, with his "log cabin" image. The truth that he came from a wealthy, prominent family was no more relevant than the fact that "cowboy" George Bush did. 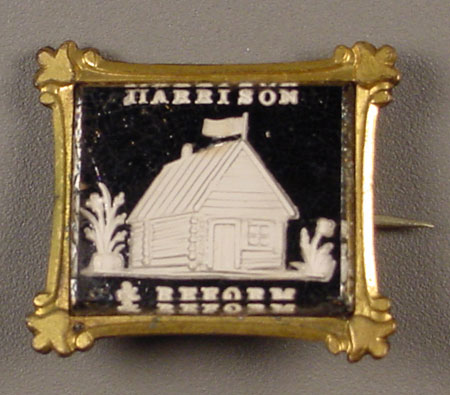 Not all presidential imagery is used to sell the canditate running for office. Sometimes the images are used to sell unrelated products. My sister, Holly Cowan Shulman, one of the world's leading experts on Dolley Madison relies on, and loves, the pop cultural images of the "first" first lady, hostess of Washington. Madison's name and image was used widely, after her death, to market products from ice cream to tobacco to cake.

By the time of the Abraham Lincoln campaing, tintype and ferrotype processes allowed for mass manufacture of images and campaign promotional badges. 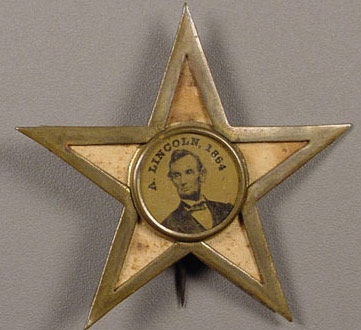 Lincoln ambrotype badge/pendant. As much an ad for the manufacturer as for the candidate. Courtesy of Politcalbadges.com 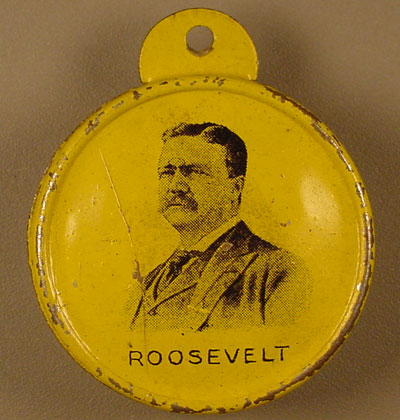 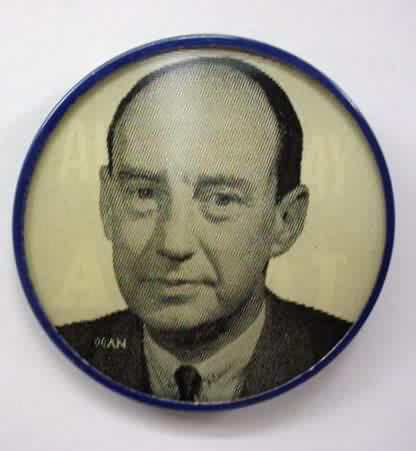 Heavy on symbolism - the Adlai Stevenson hole in the shoe pin. A wonderful customer gave this to me. 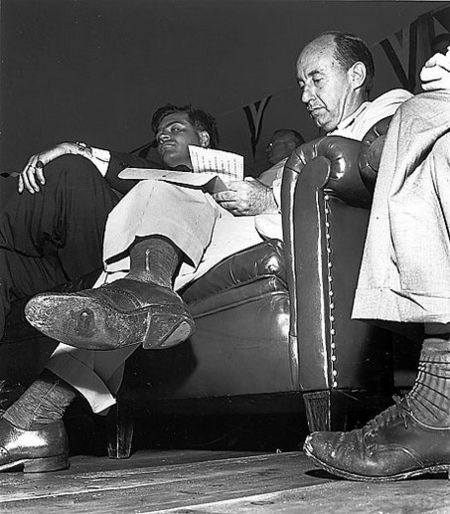 Adlai Stevenson, hole in his shoe. 1952, photo by William M. Gallagher. This photo, shot at arm's lenght so Stevenson wouldn't realize what was happening, won the Pulizer prize in 1953. The Flint Journal

Any photojournalist or political historian remembers the Stevenson photo and the powerful symbolism of a president who encourages thrift. Which brings us to Barack Obama. 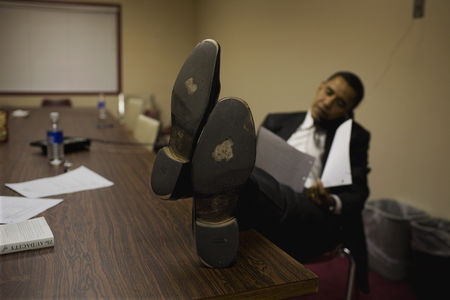 Photo by Callie Shell/Aurora for Time. Providence RI, 3/1/2008 "Senator Obama was doing press interviews by telephone in a holding room between events. Sometime later as he was getting ready to begin his event, he asked me if I was photographing his shoes. When I said yes, he told me that he had already had them resoled once since he entered the race a year earlier. "

The Obama buttons are famous, as are the Shepard Fairey Obama Hope posters. Right now, all you politcal ephemera collectors can jump on the bandwagon and get this new sticker by Shepard Fairey from MoveOn.org. But hurry up. The limited edition (5,000)  Shepard Fairey Yes We Did poster sold out in record time yesterday and I blinked and missed it. Really. I was with a customer and when I came back online they were gone. They will be available on the secondary market, but prices will rise dramatically.

Shepard Fairey, Yes We Did sticker available from MoveOn.Org.

update Nov 11: the signed We Did It poster sold out. At last look, MoveOn.org was still offering unsigned posters for a donation of $15.

A few years ago, when I first thought about creating a website, my main inspiration was my older sister, Holly C. Shulman, and her outstanding website, The Dolley Madison Project . Holly, Dolley. Be confused not. Holly C. Shulman is probably the foremost scholar on Dolley Madison. Dolley was the wife of President James Madison and the most famous hostess of Washington DC. Far from being stuffily academic, the website is gorgeous, informative and fun. Produced as a project of the Virginia Center For Digital History - University of Virginia, The Dolley Madison Project has both academic clout and design pizzaz. The graphics are beautiful, including probably all the known likenesses of Dolley. There is a section on Dolley and pop culture and a section on how to read old handwriting. 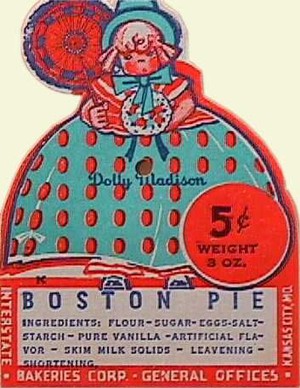 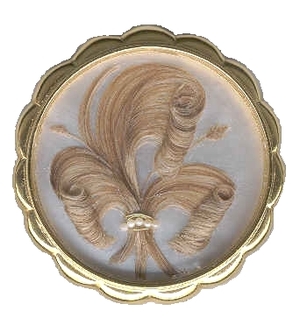 Jewelry made from hair of a deceased beloved. From VCDH  website. University of Virginia

Now Holly Shulman has published a piece in the Virginia Center For Digital History Website/blog about Dolley, James and the custom of making jewelry from the hair of a dead beloved to use as a memento mori. According to Shulman, "The fascination with ritualized mourning clothes and accessories has generally been considered an outgrowth of Queen Victoria’s intensely private, but socially influential bereavement of her husband, Prince Albert. But Albert did not die until 1861, and Dolley wrote her cousin in the summer of 1837. We can assume that in her practice and assumptions about memorializing the dead, Dolley was not alone among her friends and family in Virginia. These letters inform us about their practices of mourning. It indicates a shift in how the dead were remembered, and it locates the tradition of creating jewelry with hair enclosed to the 1830s."

Holly also edits another website, an exhibition site about Wednesdays In Mississippi: Civil Rights as Women's Work. Maybe I'll post about it another time.