It's probably a good omen when a car trip starts out with seeing a truck with your name on it. 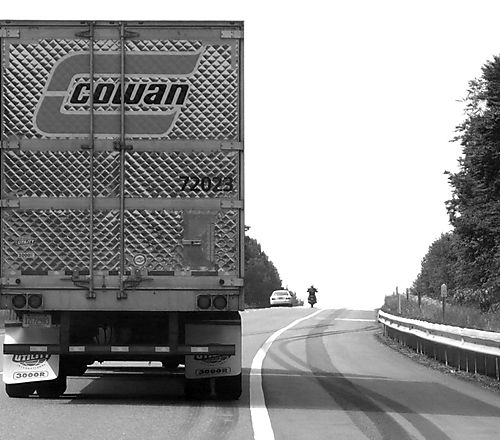 I took some time off last weekend with my parenting partner, Laurie Essig, and our two kids to visit our old house in Greenport, NY. We sold the house about five years ago and none of us had been back since then.

Naturally, we visited the carousel. 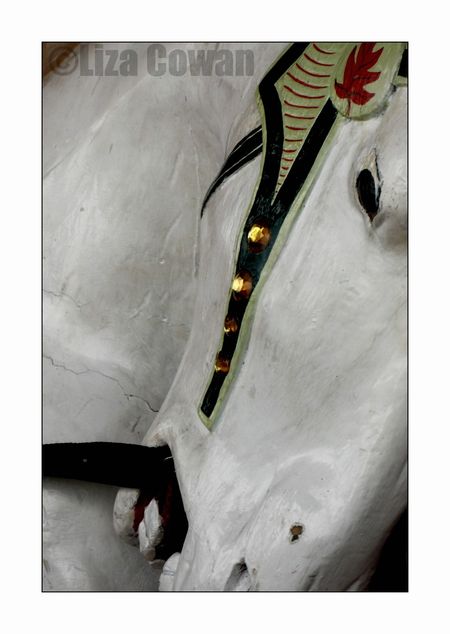 I hadn't remembered that there are several Charles Dare horses on the Greenport Carousel, which was a wonderful surprise for me. 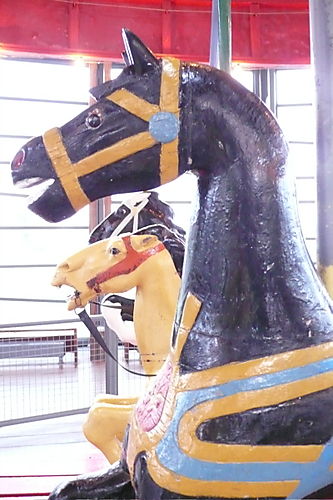 I got to spend a little time at the Greenport Shipyards, site of my Shipyard Archeology photo series. I only had my point and shoot camera with me, and I just can't get the same quality I got from my trusty Nikon F100 and a roll of film, but still it was nostalgic just walking around. 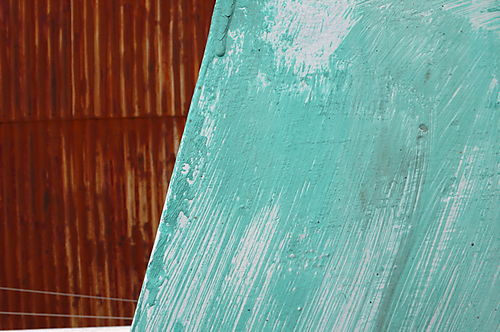 On our way home we stopped for a few hours in New York City so Laurie could tape a TV Show about Gay Marriage. (No, we're not. Families have all kinds of shapes and configurations.) The show was the Laura Flanders show on GRITtv, and although the kids wanted to go shopping during the taping, we did manage to catch the last few minutes and hang out in the control room to see the backstage operations. You can watch the segment here 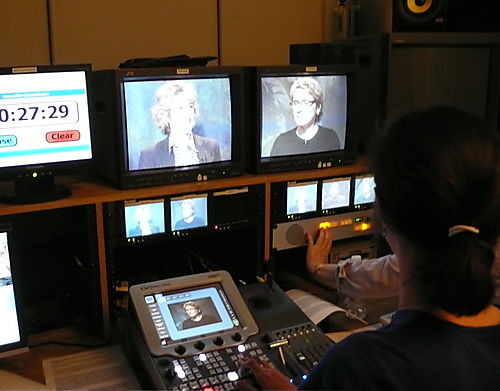 And then a quick hello to the panel and Laura. 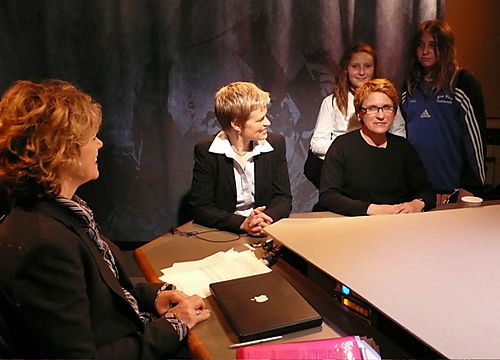 Laura Flanders, left.  Laurie and kids, right. Not in this picture is panelist Kenyon Farrow, whose excellent blog is worth taking a look at.

So if you watch the show and Laurie briefly mentions her kids and parenting partner, that's us. I'm in the Vermont media fairly often, usually about art, so it was fun to be on the sidelines and out of the spotlight.

The best part about travel, when you know things are going really right, is when you are happy to get home. We were all glad to cross Lake Champlain and be back in Vermont again. 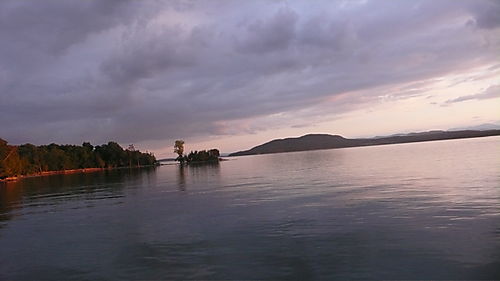 The amusements of Atlantic City in the last post made me think of carousels. I have spent periods of my life obsessed with carousels. In my own childhood I rode the Stein & Goldstein horses at the carousel in Central Park in New York City. But more than that, we had our own carousel horse on our lawn in Redding Connecticut in the early 1950's. Nowadays, nobody in their right mind would leave a vintage wooden carousel horse outdoors, exposed to the elements and gaggles of rowdy children, but in those days the discarded horses were not particularly valuable or appreciated as works of folk art. 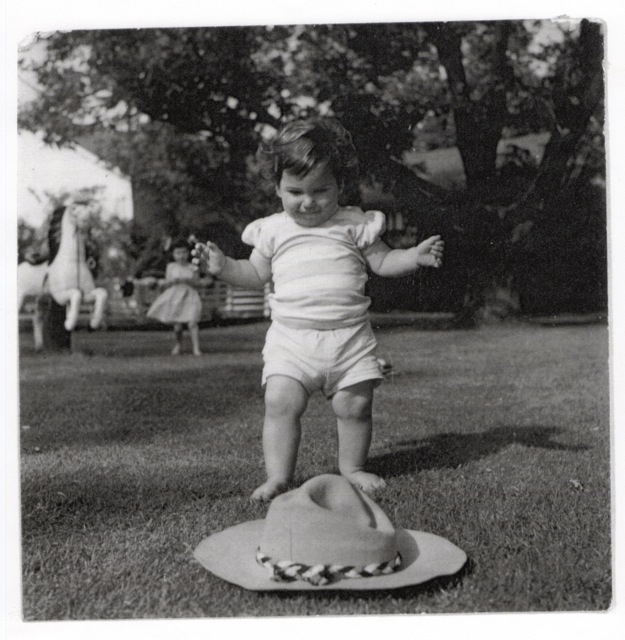 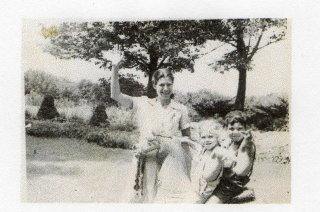 My sister just sent me this. Sorry about the quality, it's a many times scan, but here is my mother, Polly Spiegel Cowan, with my sister Holly and brother Geoff on the carousel horse.  I don't understand the seeming discrepency in the color of the mane, but I guess that between the time of the picture with my mom and sibs, and the one of me, the horse was painted. Ouch.

The horse  sat on our lawn for years. The mind boggles. I rode this horse until my early teens, when we sold the house. And by "we" I mean my parents. Years outdoors exposed to the elements runied this fine piece of sculpture, and I regret that more than I can begin to express. 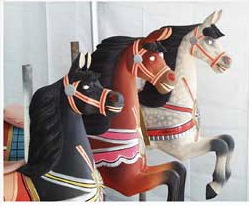 These horses are in the New York State Museum in Albany.  Armitage/Hershell machine probably carved by Charles Dare in the 1890's. 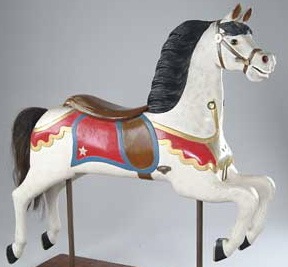 Attributed to Charles Dare. Photo from James D. Julia Auction, Maine.  This is the horse we had. The breastplate and saddle on ours was simpler, but otherwise they match up. My heart is breaking.

Moving on from my heartbreak...

When my daughters were little, we were lucky to have a house in Greenport Long Island, where there is a beautifully restored Hershell Carousel right on the water's edge. I got a call one evening at dusk that the horses were about to be moved to their newly built pavillion, so I raced over and got this shot of some of them stacked up and ready to go. The light was fading too fast, so I only got a couple of good images. 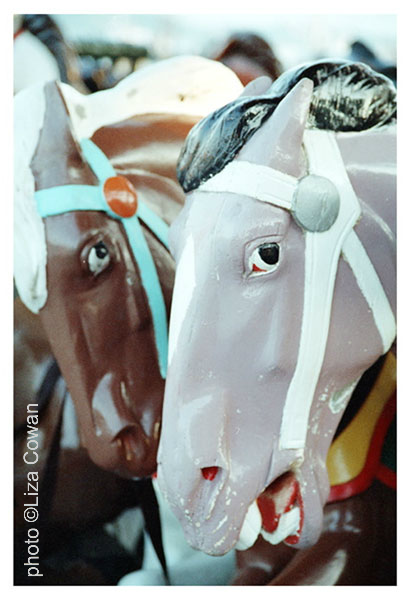 This Hershell beauty was up and rolling when I took the picture. The Greenport Carousel actually has a brass ring, which makes it even more exciting and historic. 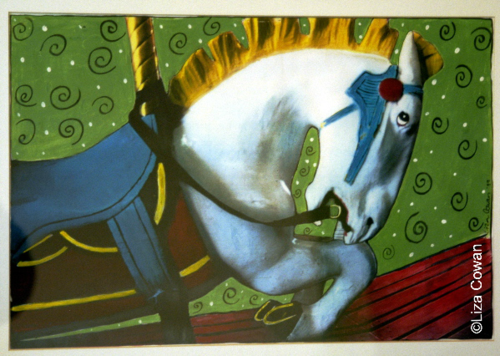 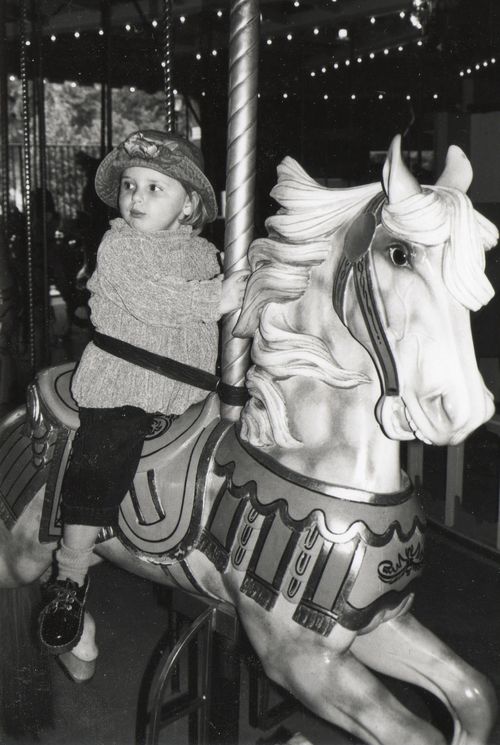 The carousel in Prospect Park, Brooklyn, NY has beautifully renovated horses carved in Coney Island sometime between 1910 and 1915 by Charles Carmel. We spent many an afternoon there. The American Folk Art Museum in New York recently had and exhibit, which I missed, called Gilded Lions and Jeweled Horses, The Synagogue To The Carousel, which traced the art of Jewish immigrant carvers "inspired by their memories of the  symbols and forms they left behind. Some of the same Jewish artisans who arrived in America at the turn of the twentieth century and carved for their local synagogues also found work carving horses and other animals for the flourishing carousel industry." 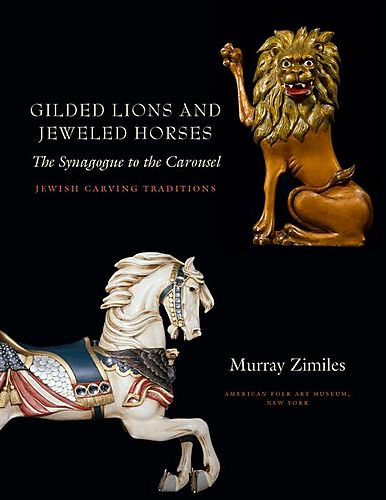 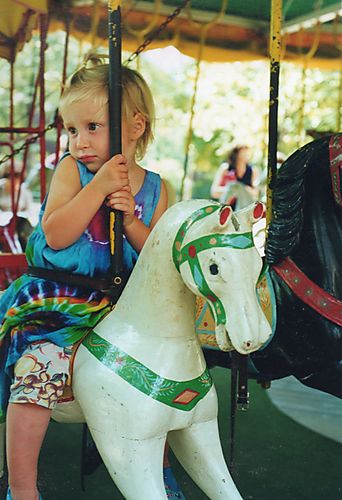 This turn of the century carousel is in the Luxembourg Gardens in Paris. The children can take sticks and try to spear the wooden hoops. This must hark back to when carousels were used to teach jousting to knights. It's as much fun for the children as grabbing for the brass ring. Notice how petite these horses are. 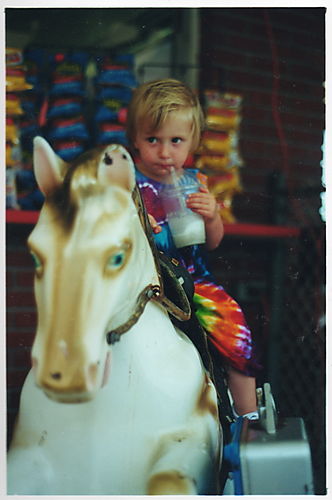 And then, sometimes, a mechanical horsie -ride -for- a- quarter is just as much fun. Although GW is wearing the same dress as in the Paris photo, it is not the same day, or even the same country. She just adored the dress. 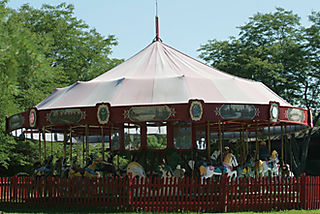