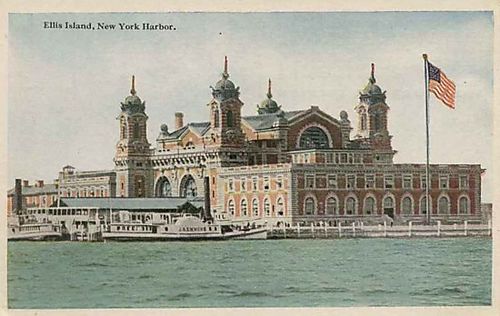 I adore the photographs of Stephen Wilkes. I particularly love his series of photos of abandoned spaces. I place them in the genre of modern ruins. I don't know if Wilkes does or not. It's certainly not all he does, but they are the ones that resonate most for me. Wilkes is the photographer I'd like to be if I were a good enough photographer. I have a good eye. Wilkes is a good photographer with a good eye. "Good", of course, is totally loaded with cultural and subjective suppositions. Wilkes is  good. And by "good" I mean "I feel faint from their beauty, technique, and emotion." 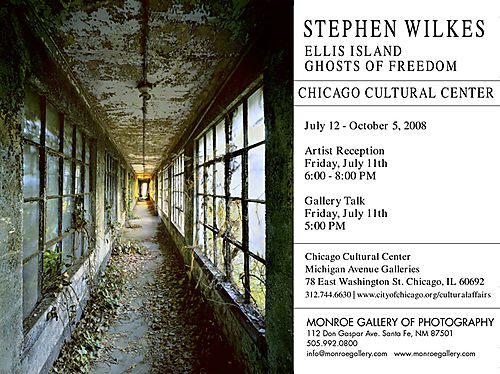 If you will be in or near Chicago from July 11 to October 15th, really try to get to this show.  The Chicago Cultural Center, Michigan Avenue Galleries, 78 East Washington St. 312 744 6630 www/cityofchicago.org/cultural affairs.

This series of photographs is breathtaking. Those of us who live in the US (and many of my readers do not) probably understand the cultural and historical backstory of these photographs. Ellis Island has a fascinating history, the most famous of which is it's role as the  port in New York City through which came 12 million  immigrants from all over the world from 1892 to 1954.

Wilkes photographed the hospital and contagious diseases complex at the ruins of Ellis Island over a five year period starting in 1998. 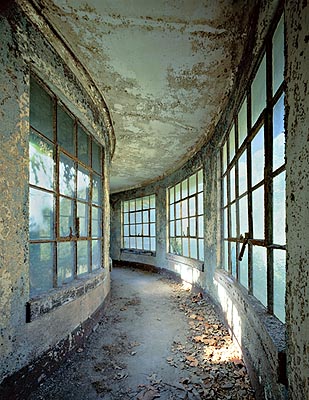 These images look great online, but seeing them in person is an experience. This one, for instance, I'm sure contains the ghost of a little girl. I actually own a print of this, and it took me weeks to make my peace with her. I didn't feel any pain or malice coming from her, but it was spooky. And sometimes she wasn't there. I know this sound really screwball, but I swear it's true. It happens that Wilkes named his book on Ellis Island Ghosts Of Freedom.   I urge you to follow the link to the book website and if you want your own copy, Buy the book from my Powells partner account

I first saw the Wilkes Cibachrome prints at The Monroe Gallery in Santa Fe,  where I bought my print in 2003. I had already been making my own series, Shipyard Archeology, and was in love with the genre of modern ruins. When I saw the Wilkes photographs they stopped me in my tracks.

If you are or will be near Santa Fe, New Mexico, and you love photography, go to the Monroe Gallery. Owners Michelle and Sidney Monroe are my role models for owning a gallery, although in fact, mine is nothing like theirs. They specialize in "classic black & White photography with an emphasis on humanist and photojournalist imagery." They curate wonderful shows, which I wish I could go see regularly, but hey, I'm stuck in Vermont.

From Oct. 3 - November 16th 29, 2008, The Monroe Gallery will be showing Stephen Wilkes' new collection of photographs taken in China over the last three years. 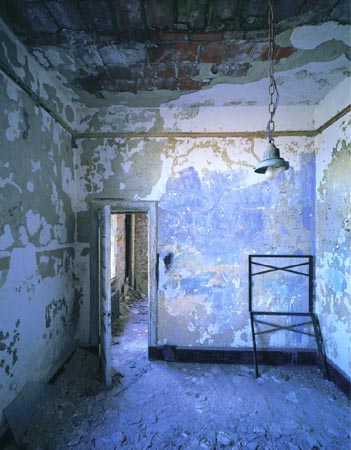 "The Statue of Liberty loomed over my shoulder, yet I felt no less an archaeologist than those who ventured into the Mayan tombs. I wore a respirator against the ravages of asbestos and lead paint. I saw the shoes of immigrants long forgotten; shards of mirror; remnants of beds; the ruins of the autoclave, a chamber where tuberculosis-infected mattresses were sterilized with scorching heat. I saw Eveready batteries hooked to strange pipes...

"...I felt the palpable presence of humanity everywhere I turned, in every room. It was an energy in whose presence I felt tremendous humility.

"...Strange things happened. I'd photograph a mirror that had hung on a wall for half a century, on to return to find its shattered remains. I'd photograph a show, which several days later had disappeared though no one had entered the space after me. I photographed the 500-foot long spine of the hospital, Corridor 9, a long tunnel of decay. In the photograph, a golden glow of sunshine warming the walls at the far end is visible. In all the times I returned to it, I never again saw this glow, nor can I discern its origin." 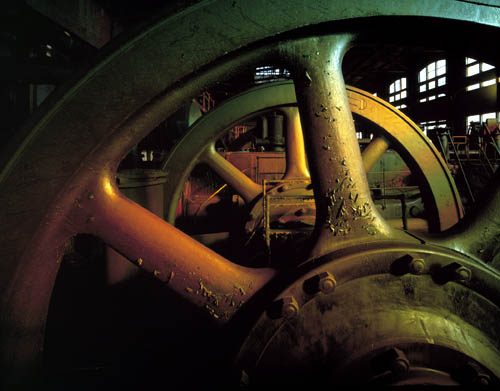 OK, here I have to digress to make a comparison  to one of my own photographs from my Shipyard Archeology series from 1999. The photographic quality of his is better. I have no idea what kind of camera, lens, film he was shooting with. His website is not filled with information on technique, but Wilkes is a master of light and capture. I was shooting with a Nikon F100 with a 50mm lens. Still... 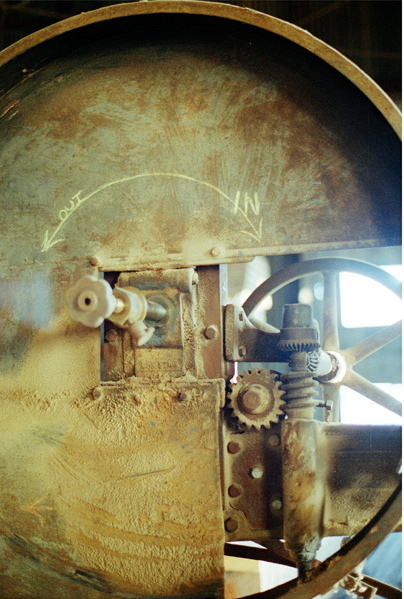 All the Stephen Wilkes images in this post are from The Monroe Gallery Website. Thanks Michelle and Sidney! Love ya! 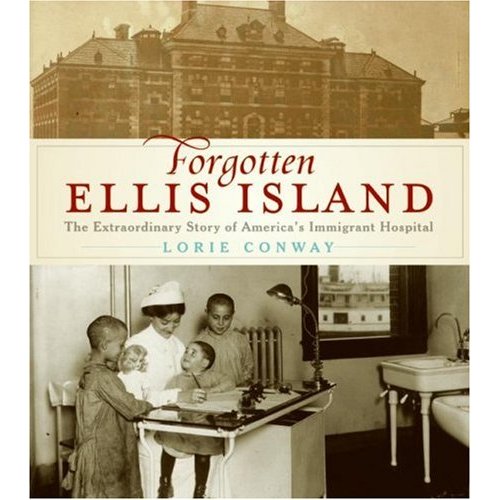 This book ,  Forgotten Ellis Island: The Extraordinary Story of America's Immigrant Hospital by Lorie Conway looks great, too. I haven't read it yet, but I've ordered it. Dr. Fitzhugh Mullen, who I have known literally all my life, was a consultant on the book and film.  There's a DVD as well, which is available through the Forgotten Ellis Island Website

You can also check this link to PBS to see when this film will be shown in your area. 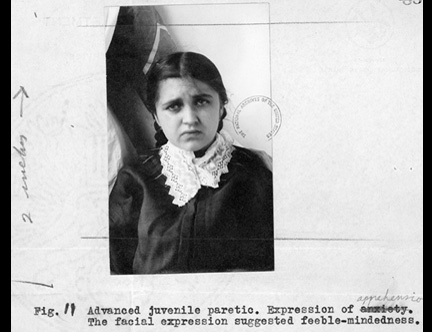 "Since I had researched Dr. Mullan's files before, I was not expecting to find anything new, but tucked behind several letters written by Dr. Mullan were these original, black and white images, complete with typed captions indicating various mental conditions: constitutional apathy, low grade moron, juvenile paretic, surly, and the catch-all description, "feebleminded."

Public health physician Fitzhugh Mullan, grandson of Eugene Mullan and one of the advisors to the Forgotten Ellis Island film/book project, analyzed the photographs from his grandfather's file as attempts to "distinguish between normal and abnormal and various levels of abnormality." Since the feebleminded were automatically deported, one can only assume that the people in these pictures were denied entry to America and sent back to their homeland." Laurie Conway,from Forgotten Ellis Island Website

These photographs are by Christoper Barnes from 1986, obviously predating the Wilkes portfolio. The Barnes photographs were used in Forgotten Ellis Island. I urge you to check his website to see more of the series. 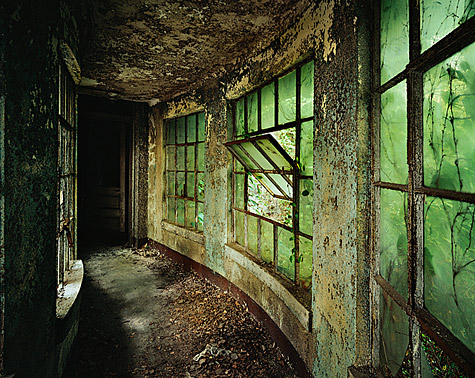 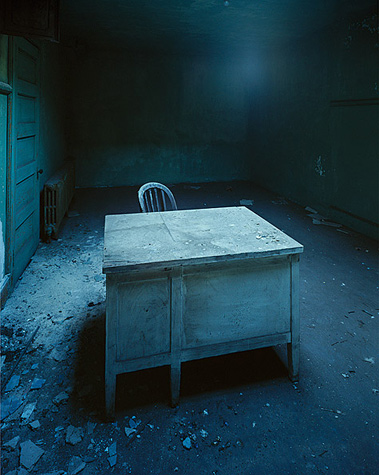 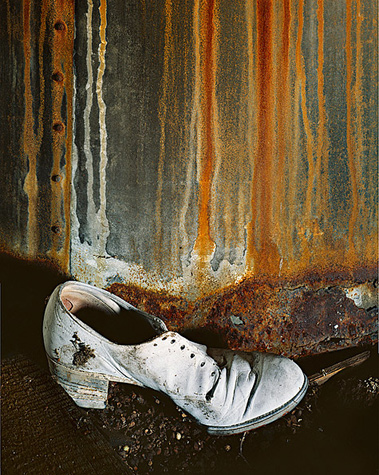