Lordy. It was in the nineties and humid as the tropics. But we had over a thousand visitors to PSAW  during Art Hop to see the amazing exhibit of photographs of the last free days of Tibet, taken Heinrich Harrer at the request of the young Dalai Lama. Harrer was the author of Seven Years In Tibet. Publisher Leslie DiRusso, who came up from New York for the opening, was astounded and gratified that even in the thick crowds, even with all the other events and exhibits going on for Art Hop, people stood and read all the commentary, stayed to ask questions, and were so engaged with the work. 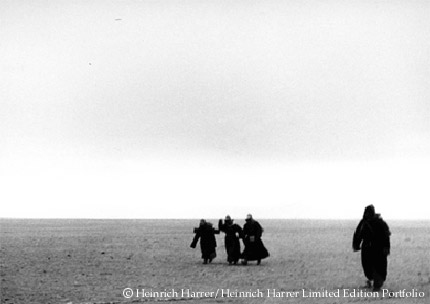 Text for this photo, taken from writings by Harrer:

The wind springs up early across the treeless, almost lifeless, Tibetan plateau. By midday it sweeps with gale force, carrying sand or snow, stinging and cutting travelers' faces. What light there is casts a bleak twilight pall over the wastelands.

Here, second from the left, the newly invested Dalai Lama, flanked by two of his personal khenpo (abbots), staggers against the winds on the Plain of Tuna in his flight from the Chinese advance. In the foreground struggles Phala Dronyer Chenmo, the Lord Chamberlain.

My annual Art Hop guest vendor is Flashbags, our wonderful local bag and accesories manufacturer. The amazing Ali Marchildon and Laura Cheney filled my back room with their goods, which they make right here in Vermont. The biggest hit was their Obama Bag! These are made of laminated paper, individually stitched on their sewing machines, using grommets and beverage tubing for handles. Each bag has the image inside and out, and there's even a cell phone pocket. 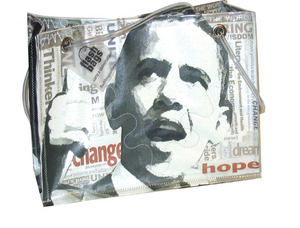 You can get these online from Flashbags, or if you are in the neighborhood, I have them in stock.

I also gave away almost a thousand Obama Or Else postcards to a crowd who are anxiously biting their nails to the nib over this election. It was gratifying to get such an overwhelmingly positive response to the card. I know, it's a self selecting audience in Burlington, Vermont, big surprise, not. But still. My message to them, and to everyone, is - do something every day to help elect Obama and defeat the lying liars. 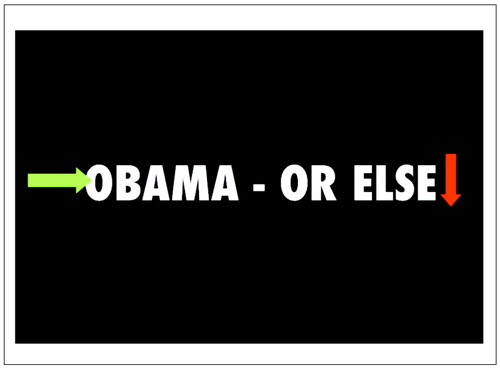 I got a wonderful email about the cards on Saturday, after the opening of Art Hop.

Liza, I just had to tell you how awesome your "Obama - Or Else" card  is!  You have said it all with just a few words.  I am 71 years old and have never been so worried about the outcome of an election.  I just pray that he makes it for the sake of my grand children and the next generation.
Thanks! Bill

I've got 5,000 more cards coming next week. I am giving these away. If you want some, send me a stamped self addressed envelope and I will send you a bunch. 10 cards = $.59 postage (I just checked at the PO) If you want to make an extra donation that's fine, but not neccesary. My address is Pine Street Art Works, 404 Pine Street Burlington, VT 05401.

It's time once more for Art Hop, Burlington's once a year art festival. Over 600 artists will be showing work in over 100 places in Burlington's South End.
Check out the SEABA (South End Art's and Business) website for the full scoop. 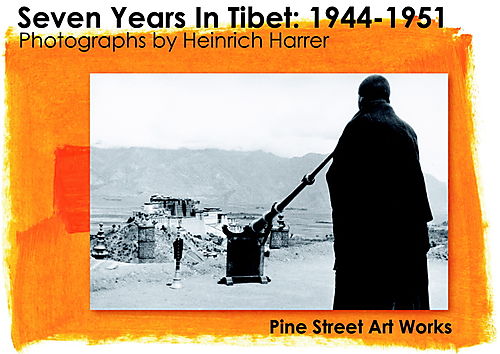 This year Pine Street Art Works is excited to present a series of photographs by Heinrich Harrer taken in the years preceding the Chinese takeover of Tibet in 1951. The prints are from The Heinrich Harrer Limited Edtion Portfolio, Leslie DiRusso,Pubisher.

From the website of The Heinrich Harrer Limited Edition Portfolio

"Heinrich Harrer, noted Austrian explorer and mountaineer, escaped over the Himalaya from a prisoner-of-war camp in British India with Peter Aufschnaiter, and then lived and worked as a fifth-ranked nobleman in the forbidden city of Lhasa. As confidant and informal tutor to the Fourteenth Dalai Lama, Harrer was afforded access to ceremonies and customs that had been rarely witnessed by Westerners.

" In the company of the Tibetan nobility, Harrer photographed a virtual family album of their lives and, in so doing, captured the richness and heart of a people: the moments with friends and family who had long accepted the photographer's eye. The Tibetans' joy at play, the leisure of the nobility, the splendor of the Buddhist rituals, the windswept plains of the high plateaus,Harrer's photographs document this with a mountaineer's sense of scale and an explorer's sensitivity to culture.

"Harrer left Lhasa in advance of the Chinese army in December 1950. Harrer's memoir, Seven Years in Tibet, has been translated into 53 languages, with more than four million copies sold. In October 1997, a motion picture based on his book, starring Brad Pitt as young Heinrich Harrer, was released by Tristar to major box-office success. Seven Years in Tibet, the book, again soared on best-seller lists around the world.

Harrer's body of work spanned more than six decades of exploration on six continents. Harrer received numerous honors, including the Eiger Gold Medal, Gold Humboldt Medal and the Explorers Club Medal, for his many expeditions and explorations, which number more than 600. He wrote 23 books and received credit on more than 40 film productions.

"Heinrich Harrer probably didn't realize it at the time, but his photographs captured a culture that has now all but vanished. His photographs are significant because he was actually shooting for the Dalai Lama, documenting Lhasa so the Dalai Lama could see what life was like outside the Potala. That gave Harrer unique access to ceremonies and scenes of everyday life that no other Westerner has ever had.

It's really miraculous that these photographs exist at all. Heinrich Harrer discovered a can of unexposed 35mm movie film and bought a used camera from a Tibetan friend. He didn't have a light meter, but he had five years to study the city and its people."

In October 2002, His Holiness the Dalai Lama presented Harrer with the International Campaign for Tibet's Light of Truth Award to honor Harrer's humanitarian effort to bring the situation in Tibet to international attention. 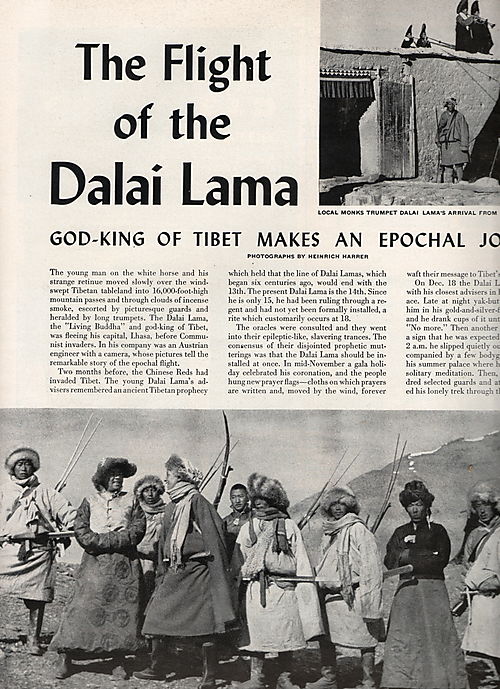 At the time that the film Seven Years In Tibet was being made, the German Magazine Stern came out with an article disclosing that Harrer had been a member of the Nazi Party in Austria. Google it, it's all over the place.

As a curator, an ethical person and a Jew, I had to think a lot about this information. To say that I spent many a restless night would be an understatement. My decision to exhibit the pictures is based on a couple of ideas.

These photographs are do not exist in the realm of fine art. That is, they are not a statement Harrer is making about himself or his beliefs, but about the subject he was shooting. They are documentary images, meant for that purpose. (I understand the complexities of documentary photography, but perhaps another time...) They were taken at the request of The Dalai Lama and document a moment in history that is not only crucial in the history of Tibet and China, but of which there is almost no other visual documentation.

A close reading of Seven Years In Tibet (which I loved, by the way, it's a great read) did not convince me of any racial, political or eugenicist motivation, at least as far as Tibet is concerned. We don't know what Harrer thought about Jews, Gypsies or Homosexuals - the usual victims of Nazi Terror. He claims to have joined the Nazi Party to be able to secure a position on a state funded climb, and to teach skiing. He claims he only put on the Nazi uniform once, to get married.

On this subject Orville Schell said ''There are not that many moments in life when to claim to be a craven careerist of the most calculating sort is a step up from ignominy.'' At any rate, Harrer was in a Prisoner Of War Camp during the war and what he did politically before the war we don't know. After his time in Tibet he dedicated much of his time to helping the Tibetan cause. He was vetted by Simon Wiesenthal, came out OK, and that's good.

"We must look at these photographs and remember that China invaded Tibet in 1950 and since then has systematically destroyed the indigenous cultural and religious practices. We must remember that Tibetan culture now exists primarily in exile. We must acknowledge the haunting nature of images of a culture now erased. We must realize that imperial nations destroy and create. After all, it was the imperial agenda of the Nazis, one that sent a young SS officer named Heinrich Harrer to India in the first place. And we must acknowledge the imperial and expansionist nation that we too live in, a country that is destroying Iraq even while it produces beautiful and haunting images of this destruction. We must remember for that is what Harrer's photographs insist we do. We must remember Empire and be moved by Art. "