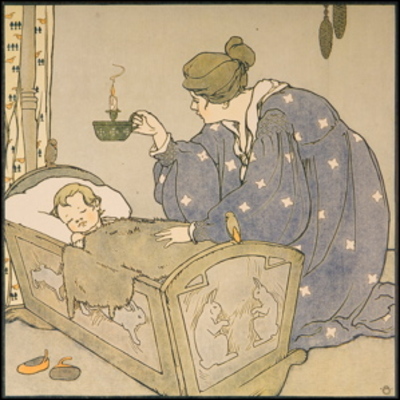 Collecting is an adventure. The civilized version of big game hunting. You never know where the chase will  will lead, what roads you will follow. Here, we go from nursery illustrations to the early history of cinema.

A couple of years ago I was hunting at an antiques show. I was fast- walking the aisles, which is how I always do my first scan. I stopped abruptly at  a huge chromolithograph schoolroom poster published in 1917 by Congdon Publishers in Chicago. I immediately fell in love with the Japanese - or Japonism - inspired design. The dealer knew the name of the illustrator, Mary Louise Spoor, but not much about her.

I immediately began searching for more of her work. I have subsequently found three of the school room posters. Hickory Dickory Dock, Little Bo Peep  and Baby Bunting Went A Hunting. 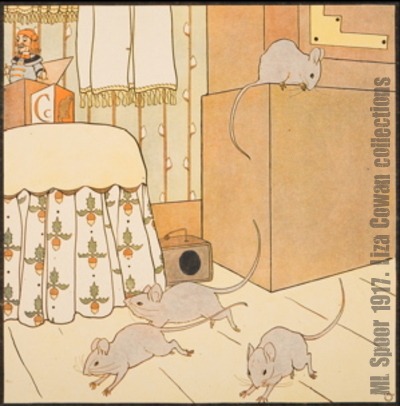 Internet searches revealed scant information on Spoor.  An interesting conversation among collectors and descendants reveals that Spoor (1887-1985) worked for a brief shining moment from Chicago, publishing illustrations for Rand McNally and Lyons & Carnihan. 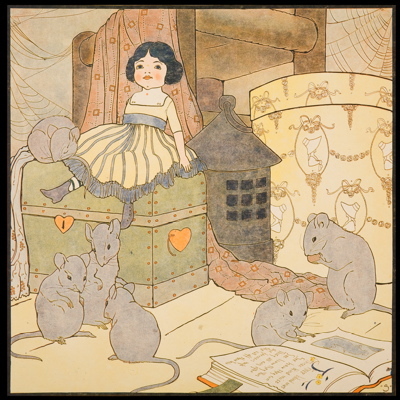 By 1917 she was married and pregnant with her first child. She moved to Massachussets to raise her family. And that, as far as I can tell, ended her professional career. She continued painting and drawing private works that would end up in family collections but those works have not yet entered into public circulation. Nor may they ever. What a shame to have access to so small a piece of a life's work 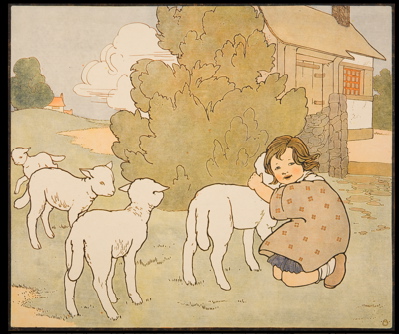 Before she left Chicago, Mollie, as she was called, went to The Art Institute  and shared a studio with Gertrude Spaller, another young illustrator. Together they illustrated at least two children's readers. The Easy Road To Reading Primer editions one and two. 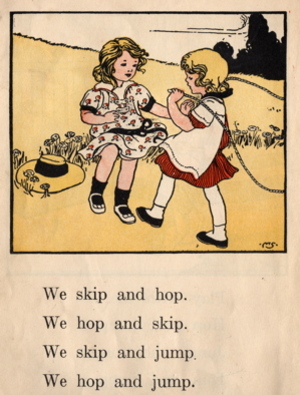 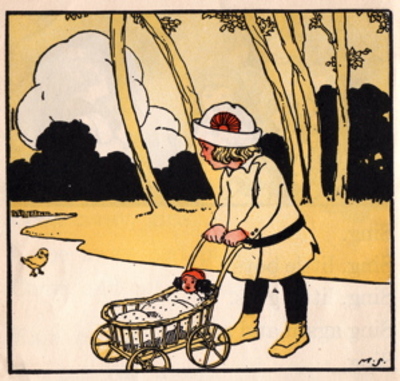 Here's where the road forks:

Mollie's brother was George K Spoor. In 1907 George founded Essany Studios in Chicago. Essanay was one of the first movie production studios in the US during the blink of an eye when Chicago was the center of US movie production. A couple of years later Essanay built studios in Niles, CA, but kept offices in Chicago.  George Spoor's partner in Essanay (S&A) was Max Aronson, aka Gilbert Anderson, aka  Broncho Billy, the very first film cowboy star . 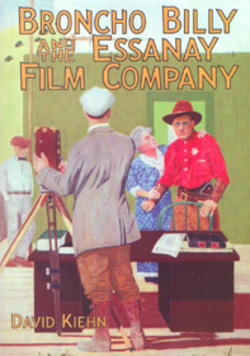 That's right. The first cowboy star was Jewish. Aronson/Anderson appeared in the first great narrative film ever, The Great Train Robbery, then went on to direct and star in hundreds of films for Essanay.

When it began, Essanay depended on, and discovered, local Chicago talent, many of whom went on to become some of the biggest stars and directors in the industry, including Ben Turpin, Alan Dwan, Louella Parsons, Francis X Bushman, Gloria Swanson. 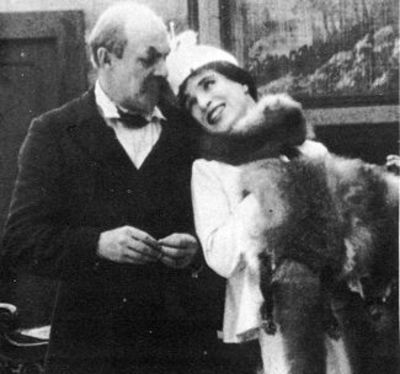 Charlie Chaplin in drag in Essanay's The Woman  from 1915

Charlie Chaplin was an Essanay star too, one of the first to be hired from outside the neighborhood. He had a contentious relationship with the studio, and left after a few years. His first version of The Tramp was an Essanay production.

It seems not unlikely  that the George Spoor would have asked his illustrator sister to design movie posters for his studio. She did design the Indian Chief logo for them. So far, I haven't discovered any but the hunt is on.

conversation amongst relatives and collectors at Antiques and The Arts

essay on essanay from Chicago Magazine May 2007