From 2005, here's an interview with me about my FAKE! Series. Taped in Burlington, Vermont by Paul Larson at Mountain Lake PBS.

This interview was originally done on video, and after they had rebroadcast it several times over the years, the station switched to digital.  The video went into the Mountain Lake PBS archives until Paul had it transferred to digital and posted it on youTube again. I'm so glad.

IF YOU ARE SQUEAMISH DON'T PROD THE BEACH RUBBLE If You Are Squeamish Don't Prod The Sea Rubble. Sappho. Painting on glass by Liza Cowan 1999

This painting cracked and broke in 2001, during a move. I just found the only photo I took of it. I used rubber stamps for the text, and even though I used waterproof ink, I found I had to paint over the lettters with black paint. the panes are translucent, but I placed a white foam core board behind so the letters would be legible.

As much as I enjoyed my chicken thanksgiving dinner, I'd rather be painting them than eating them. 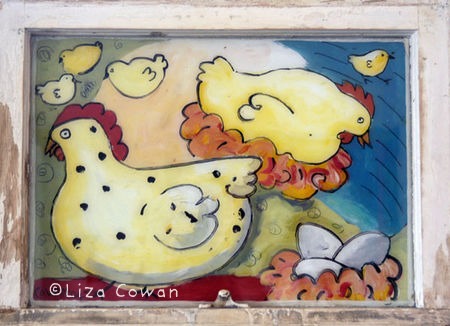 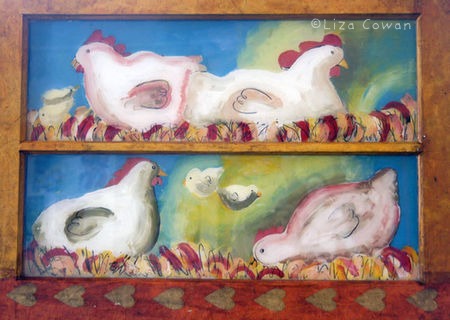 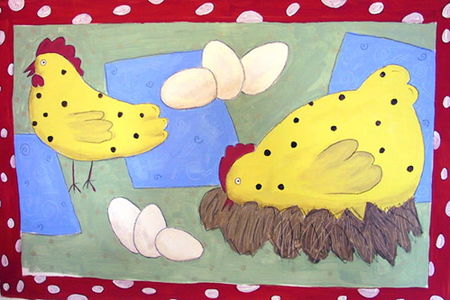 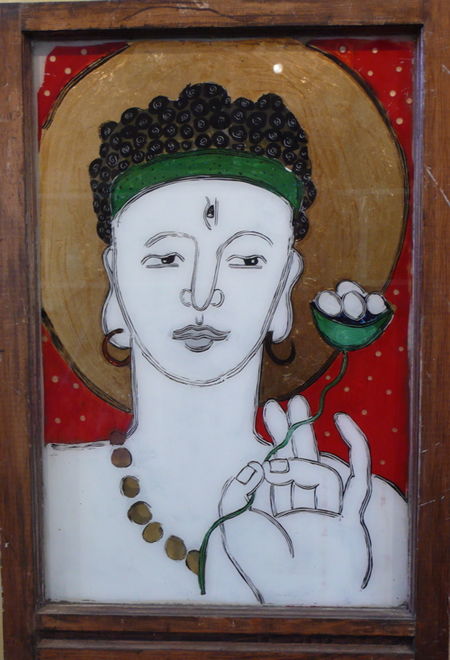 In the excruciatingly long couple of months from the day Barack Obama became the Democratic Nominee for President Of The United States Of America to the night he was elected (yesterday)  I have posted in this blog almost exclusively about the election. I felt it was my civic duty to suspend regular programming to focus on this world changing event.

I've tried to tie my posts to art about Obama, and in so doing, discovered one of my new favorite artists, TMNK, The Me Nobody Knows. My gallery  has been filled with Obamabelia - that kind of rolls off the tongue, doesn't it? I have given away over 5,000 Obama Or Else postcards, and sold over two dozen  handmade limited edition Obama handbags by Flashbags. In the gallery I have blasted the Obama cd, Yes We Can, Voices From A Grassroots Movement, until I have every word memorized, and my customers have now come to expect to hear Obama's inspring words when they step inside the PSAW zone.

I've also kept some Tibetan White Taras around the gallery, particularly in my show window, hovering over the Obamabelia and Obama art. Why? Because I wanted to wrap Obama in the  aura of this powerful protector goddess. Call me spiritual, call me superstitious, but I felt compelled to ask Tara for her help. And, help she did. Along with all other protective deities from multitudes of religions  and spiritual practices from every corner of the globe.

Green Tara would have been a good choice as well. But I had a series of paintings of White Tara that I did several years ago, so she is the Goddess I invoked. Link here for more images and text on my Tara Paintings.

Tara, (Sanskrit, "star") is a Buddhist savior-goddess especially popular in Tibet, Nepal and Mongolia. In Tibet, where Tara is the most important deity, her name is Sgrol-ma, meaning "she who saves." The mantra of Tara (om tare tuttare ture svaha) is the second most common mantra heard in Tibet, after the mantra of Chenrezi (om mani padme hum).

The goddess of universal compassion, Tara represents virtuous and enlightened action. It is said that her compassion for living beings is stronger than a mother's love for her children. She also brings about longevity, protects earthly travel, and guards her followers on their spiritual journey to enlightenment

According to Buddhist tradition, Tara was born out of the tears of compassion of the bodhisattva Avalokiteshvara. It is said that he wept as he looked upon the world of suffering beings, and his tears formed a lake in which a lotus sprung up. When the lotus opened, the goddess Tara was revealed.

White Tara (Sanskrit: Sitatara; Tibetan: Sgrol-dkar) is sometimes called the Mother of all Buddhas and she represents the motherly aspect of compassion. Her white color signifies purity, wisdom and truth.

In iconography, White Tara often has seven eyes – in addition to the usual two, she has a third eye on her forehead and one on each of her hands and feet. This symbolizes her vigilance and ability to see all the suffering in the world. The "Tara of Seven Eyes" is the form of the goddess especially popular in Mongolia.

In religious practice, White Tara is believed to help her followers overcome obstacles, espeically those that inhibit the practice of religion. She is also associated with longevity.

Green Tara (Sanskrit: Syamatara; Tibetan: Sgrol-ljang), filled with youthful vigor, is a goddess of activity. She is the fiercer form of Tara, but is still a savior-goddess of compassion. She is the consort of Avalokiteshvara and considered by some to be the original Tara. Like Avalokiteshvara, the Green Tara is believed to be an emanation of the "self-born" Buddha Amitabha, and an image of Amitabha is sometimes depicted in Tara's headdress.

In Buddhist religious practice, Green Tara's primary role is savioress. She is believed to help her followers overcome dangers, fears and anxieties, and she is especially worshipped for her ability to overcome the most difficult of situations. Green Tara is intensely compassionate and acts quickly to help those who call upon her.

So thanks and prayers to Tara, om tare tuttare ture svaha. Goddess bless Obama and all sentient beings working to make the Earth a better, safer, saner, healthier home filled with justice for all.

We now return to our reguarly scheduled programming.

Reader Ginny J-B asked about the reverse painting on glass in the photo of my exhibit at Healthy Living in South Burlington.

The Liza Leger she asked about it is the first one of his works that I FAKEd. I've always been a huge Leger fan. I remember copying "Big Julie" using scraps of color from magazines for my color class during my foundation year at The School Of Visual Arts in NYC. But that wasn't  a FAKE! Yet.

During the winter of 1999 or 2000 I was doing a lot of painting on windows, experimenting with color and line. I had just discovered a wonderful glass paint made by Pebeo of France. The line is called Vitrail and I love them. When I was looking at a book of paintings by Leger  it dawned on me that the color fields he used in some of his work would look wonderful as translucent shapes. 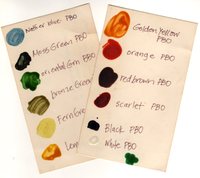 Here is the color chart I made for working with the product. 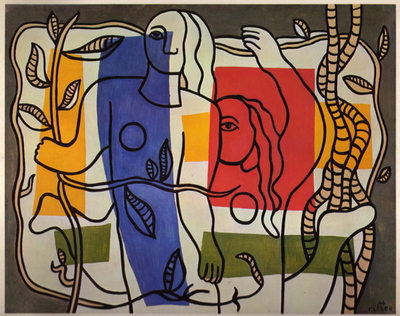 This is a scan of the reproduction of the original Leger. Two women and flowers. 1949 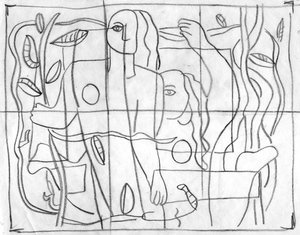 My cartoon and graph for my FAKE painting. 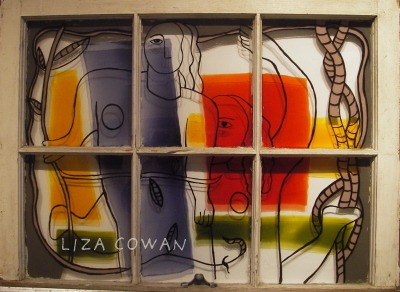 I was still experimenting when I made this. Well, I'm always experimenting, but in this case I hadn't used translucent paint and opaque paint on the same piece, and I was initially disappointed with the combination, because when you hold the piece up to the light the opaque paint looks nasty. It is the vines on the edges that are opaque. So the whole translucency of the piece was compromised and it had to be a wall piece. I solved this by backing the painting with white board,  which actually is great because when light is on the piece, it casts shadows onto the white backing, adding a whole new dimension. Extra bonus - the piece changes with the changing light.

I hadn't thought of the FAKE series when I made this. I just wanted to experiment and have a Leger. Most of the works in the actual series work with tweaking the pieces to see how much I can change a painting, add my own "paw" as the French say, and still have it recognizable as a Leger or a Picasso or a Matisse. This one is almost pure Leger. Except it's not.