THE END OF POLAROID AS WE KNOW IT

The Boston Globe announced that Polaroid Corp. is shutting down its film manufacturing plants in Massachussets and abandoning the technology that made the company famous. They are interested in licensing their film technology to an outside firm, but if that doesn't happen, the company intends to make only enough film to last into next year. According to the Polaroid website, they have exciting new inkless, ribbonless digital printing technologies to introduce, but as exciting as this might be, it still might mean the end of another great film format. Such is the way of the world.

In light of this, I've dredged up some ancient polaroid images of my own. I took these in 1983 at The Michigan Women's Music Festival. I had a booth (with no tent, so it was actually just a bit of ground)  in the craft area selling the greeting cards and buttons that I manufactured in my business, White Mare, Inc. In addition, I made photo buttons.

In order to make buttons from Polaroids, you have to use paper-only technology. Not plastic laminated photos. I bought a used Polaroid - maybe a Land 250 or 215. It looked like this one. It was totally manually operated, meaning I had to set the aperture and  shutter speeds, using a hand held light meter. This is something every photographer should know how to do, but in the field like that it was a bit stressful, at least at first. Once the image was processed, which took place outside the camera, the paper parts had to be peeled  apart and then you had to apply a gelatinous fixative. The timing of the peeling operation had to be exact. I spent the day or two before the festival officially opened setting up my outdoor studio. I had to build a backdrop and test the light conditions.

This was in a clearing in the woods. It was hot and dusty by day. Cold and damp by night. I didn't have a tent or awning, and I was using professional grade button makers, which rusted each night. I kept a spiral bound notebook for field notes of camera settings, weather conditions and backgrounds. These images are from that notebook. It blows my mind that they are now almost 25 years old. 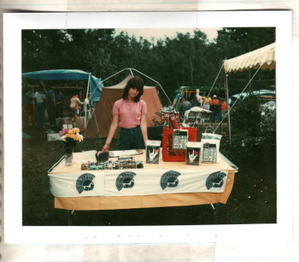 Smack dab in the clearing. I didn't have a tent or awning. My graphics were awesome though. This is my 13 year old step daughter, Adrian Hood, the best assistant I've ever had. On the table is an assortment of my wares, including my American Sign Language "I Love You" card and buttons. 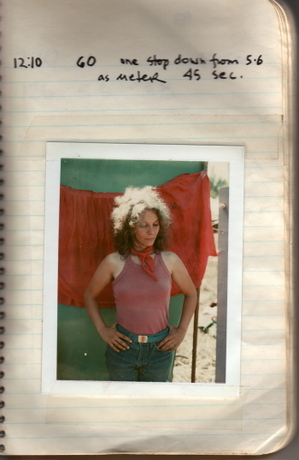 This is what a notebook page looked like. This was the beginning of the tests. Still working on the backdrop. This is Jhane, my other assistant. She was great, too. 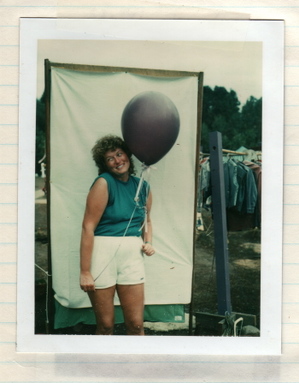 The backdrop was quite small. This is a later photo, in which I've changed the backdrop to white. 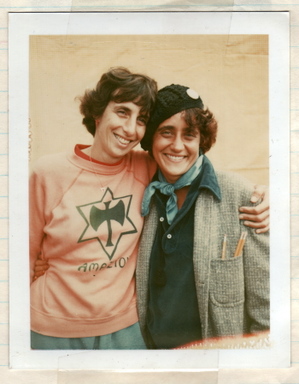 My backdrop was a yellow and white checked plastic table cloth. This is Alix Dobkin and Bonni Cohen. 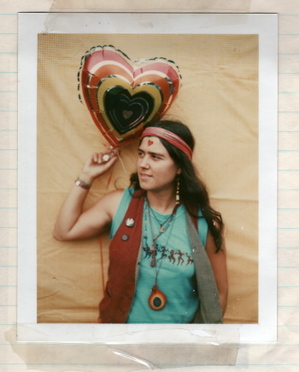 Sometimes i'd take the camera out to document what was going on at the craft bazaar. Here is artist and graphic designer Clsuf, with a young friend, Yolanda. No, that's not my mannequin. 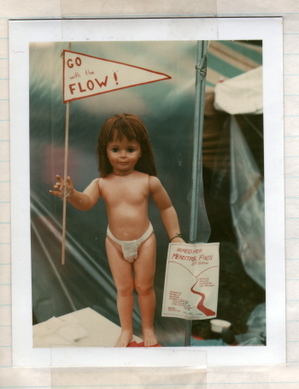 At the Red River Menstrual Pad Booth. One of my favorite pix that I've ever shot. Bonni Cohen, craft fair director. Wearing a Clsuf Women in Art T-Shirt. I've turned the tablecloth around to have the white backing show. Better for photos. 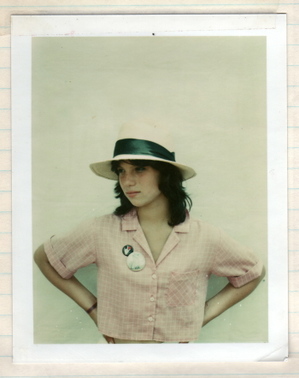 Adrian Hood wearing one of my American Sign Language "I love you" buttons. 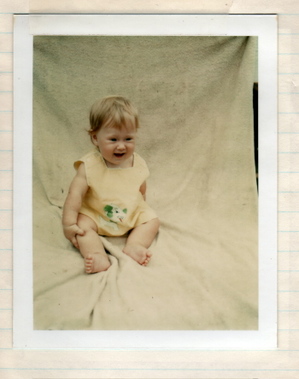 Timothy Morgan. We must have seated her on a tarp for this one.

This was one of the most satisfying photography experiences of my career. The quality of the film was wonderful, the people I took pictures of were excited, happy, curious and radiant.  I learned on the job to  bring some people out of their shells, to overcome their shyness and express themselves in front of the camera, while I was taking care of the technical details of shooting and then cutting the paper and pressing the buttons.  All this fun, and for only a couple of bucks a pin.

Not bad for a rustic photo op.