WEDNESDAYS IN MISSISSIPPI: The real housewives of Jackson Mississippi

This Op-ed was written by Marlene McCurtis & Cathee Weiss, producers of the Wednesdays In Mississippi Documentarty Film.

There been a lot of buzz recently about (the book and movie) The Help – Is it “true”?  Who is represented fairly?  What’s good and is not so good. Many question the actual merits of movie’s  “feel good” approach to race relations.  As filmmakers this controversy has confirmed our belief that we need more books, more films, and most importantly more talk about what really happened in Mississippi during this time of enormous change.

Set in the middle of the civil rights era in Mississippi, The Help depicts the relationship between two groups of women-- middle class white southern women and their black maids.  At the end of the day, it is a piece of fiction, one writer’s interpretation of the complexity of racial relationships in the south.  Yet, during this same time period there were real-life  black and white women in Mississippi quietly, and some times not so quietly,  working  hard to dismantle the dehumanizing Jim Crow system.  These women were obsessed, not about their toilets or polished silver, but rather about the abject terror incited by such racist stalwarts as the White Citizens Council and the Ku Klux Klan.  They were determined to do what they could to help create a more just society  for themselves and their children.   A few years ago we discovered a story about a few of these very real and committed Mississippi women. As documentary filmmakers, we felt compelled to add their story to our shared history.  It is the story of an amazing, yet little known organization called Wednesdays in Mississippi.

During the summer of 1964 under the banner of Wednesdays in Mississippi, over 400 women, both black and white met behind tightly drawn curtains to discuss how they could support the civil rights movement.  These were middle class women—white women who did have ‘help’, yet could clearly see the cruelty and the untenable nature of the segregated system.  They were also black women who were not maids, but who were business owners, schoolteachers, nurses and librarians.  They all were women with power and the will to invoke change. 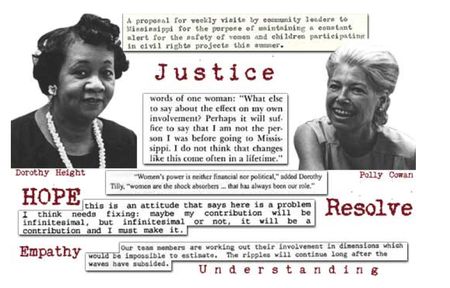 Dorothy Irene Height and Polly Cowan, co-founders of WIMS. From the WIMS website

These revolutionary meetings were organized by Dorothy Height, the head of the National Council of Negro Women and her close friend and colleague, Jewish political activist, Polly Cowan.   Dorothy and Polly were northern, yet they knew women all over Mississippi were working to support civil rights.

The summer of 1964 was Freedom Summer. Thousands of Northern college kids came into Mississippi to set up Freedom Schools and register people to vote.  That same summer Wednesdays in Mississippi brought black and white women from the north into Jackson to meet with their southern counterparts. Here’s how it worked: every week a team of women from a different northern city flew into Jackson. They came in undercover, as respectable ladies- wearing white gloves and  pearls.   They went into the heat and terror of Jackson, often against the wishes of their families, sometimes with great risk to their personal safety. Their goal was to listen to and support the women of Mississippi who sought peaceful and lasting change. 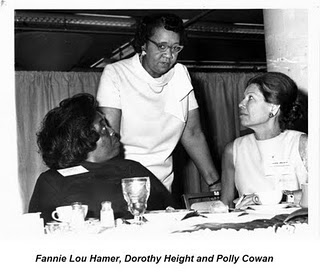 While in Mississippi these northern women met with women like Elaine Crystal, a Jewish woman who decided, “to stop playing bridge and be a part of some thing that made a difference.”  Elaine helped form Mississippians For Public Education and fought to keep the public schools opened. And women like Jane Schutt, who was an active member of the integrated organization Church Women United and served as the chair of the Mississippi Advisory Committee to the US Commission on Civil Rights.  When in December of 1963, the Klan burned a cross on Jane’s yard, she decorated it with Christmas lights and kept right on working for racial equality.

In the black community they found women like Clarie Collins Harvey.   A prominent businesswoman, Clarie had the economic freedom to boldly stand up to racist policies.  She  started WomenPower Unlimited, a grassroots organization  to support young civil rights workers in the state and to register black voters.   Clarie also developed the Chain of Friendship, an informal network of white women outside of Mississippi who supported the efforts of women fighting for integration inside the state.   Jessie Mosley was another mover and shaker in the black community. A professor’s wife, she started the first chapter of the National Council of Negro Women in Mississippi in the 1950s. While her husband’s courses at the Jackson State University “were often observed by members of the Klan or White Citizen’s Council”, this didn’t deter Jessie. She was a huge supporter of Wednesdays in Mississippi and worked  closely with Fannie Lou Hamer and other women activists to develop Head Start programs.

Throughout the 1960’s Dorothy Height and Polly Cowan continued to work through Wednesdays in Mississippi (which later became Workshops in Mississippi) to join black and white women together.  They spread throughout the state helping women work together to develop everything from home ownership projects for low-income families to community-based farm co-ops.

In the end, it doesn’t seem fair to place the burden of truth on just one story, like The Help.  Wednesdays in Mississippi offers another perspective on this “truth”. As those who were involved in this project are now reaching their 70s, 80s, and 90s, it is crucial that their story like so many others from that time be documented before they’re gone. The truth will be found when the stories of those on the front line and in the living rooms, those who were the backbone of the movement are told.    Wednesdays in Mississippi is just one of those many stories.

To find about more about Wednesdays In Mississippi and other women in the movement, please check out the following links: