This summer marks the 400th Anniversary of Samuel Champlain discovering  invading the body of water known by the Abenaki as Biawbagok - the waters in between, and by the Iroquois as Caniadari Guarunti, the door to the country. The hoopla over the quadricentennial of Lake Champlain now begins.

Ephemera fans can rejoice not in Native American images but in a bounty of European-American images produced over the last hundred or so years. Here are but a few I've collected: 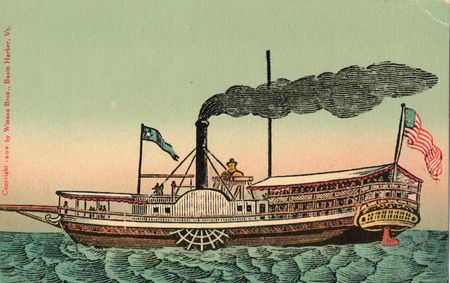 "This is a picture of the first Steamboat on Lake Champlain. (and the second in the World) It was built and launched at Burlington Vermont, in 1808, just 200 years after Champlain had entered its waters in a birch bark canoe.

The owners and builders were two brothers, John and James Winans; it was called the "Vermont;" and it was 120 feet long, 20 feet beam, 167 tons measurement; with an engine of 20 horse power, and commanded by Capt. John Winans" 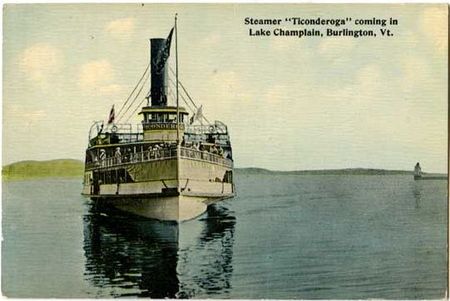 The Ticonderoga is now at the Shelburne Museum, Shelburne VT.

"Built in Shelburne in 1906, it operated as a day boat on Lake Champlain serving ports along the New York and Vermont shores until 1953. In 1955, the Ticonderoga was moved two miles overland from the lake to Shelburne Museum in a remarkable engineering effort that stands as one of the great feats of maritime preservation." 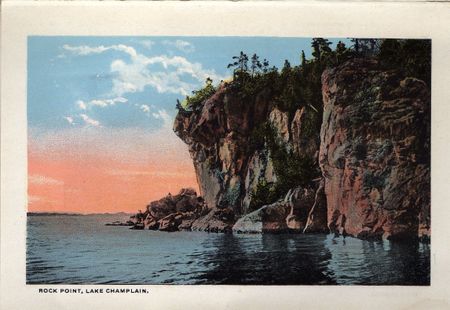 Red Rocks is about a mile from Pine Street Art Works. 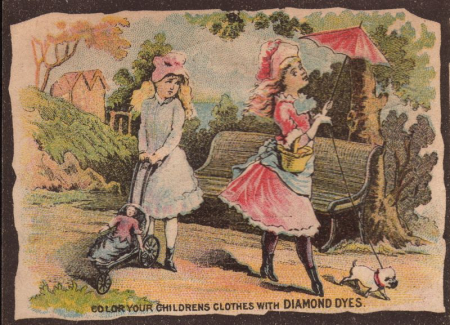 Wells, Richardson & Co was a huge business in Burlington during the late 1800's up to the 1930's. I've always imagined that this image takes place at Red Rocks. See the Lake in the background? 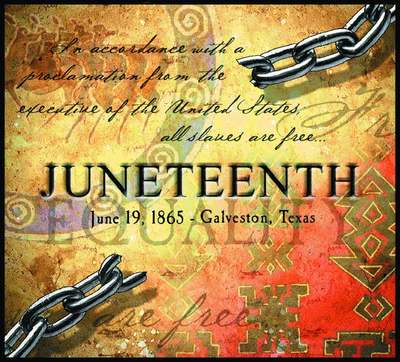 Juneteenth, also known as Freedom Day or Emancipation Day, commemorates the announcement of the abolition of slavery in the U.S. State of Texas in 1865. Celebrated on June 19, the term is a portmanteau of June and nineteenth, and is recognized as a state holiday in 31 of the United States.

The holiday originated in Galveston, Texas; for more than a century, the state of Texas was the primary home of Juneteenth celebrations. However, one small community in Arkansas (Wilmar) boasts that its celebration, called “June Dinner” has been consistently observed and celebrated, except for one year, since approximately 1870.[citation needed] Since 1980, Juneteenth has been an official state holiday in Texas. It is considered a “partial staffing holiday” meaning that state offices do not close but some employees will be using a floating holiday to take the day off.

Though the Emancipation Proclamation had been issued on September 22, 1862, with an effective date of January 1, 1863, it had minimal immediate effect on most slaves’ day-to-day lives, particularly in Texas, which was almost entirely under Confederate control. Texas was the most resistant state to the Emancipation Proclamation, as the entire state was heavily poor and reliant on slave labor. Juneteenth commemorates June 19, 1865, the day Union General Gordon Granger and 2,000 federal troops arrived in Galveston, Texas, to take possession of the state and enforce the emancipation of its slaves. Legend has it while standing on the balcony of Galveston’s Ashton Villa, Granger read the contents of “General Order No. 3”:

The people of Texas are informed that, in accordance with a proclamation from the Executive of the United States, all slaves are free. This involves an absolute equality of personal rights and rights of property between former masters and slaves, and the connection heretofore existing between them becomes that between employer and hired labor. The freedmen are advised to remain quietly at their present homes and work for wages. They are informed that they will not be allowed to collect at military posts and that they will not be supported in idleness either there or elsewhere.

That day has since become known as Juneteenth, a name derived from a portmanteau of the words June and nineteenth.

Former slaves in Galveston rejoiced in the streets with jubilant celebrations. Juneteenth celebrations began in Texas the following year.Across many parts of Texas, freed people pooled their funds to purchase land specifically for their communities’ increasingly large Juneteenth gatherings — including Houston’s Emancipation Park, Mexia’s Booker T. Washington Park, and Emancipation Park in Austin.Juneteenth celebrations include a wide range of festivities, such as parades, street fairs, cookouts, or park parties and include such things as music and dancing or even contests of physical strength and intellect. Baseball and other popular American games may also be played. 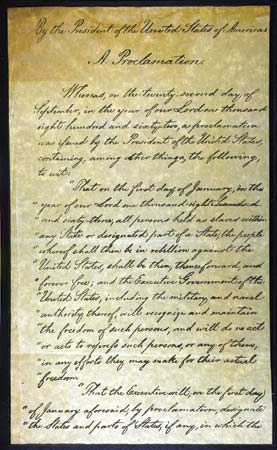 The Emancipation Proclamation:1863. The Granger Collection.

I took this photo in Greenport, NY in 2000. A misty early morning at the circus. For some reason, I feel like posting it today. 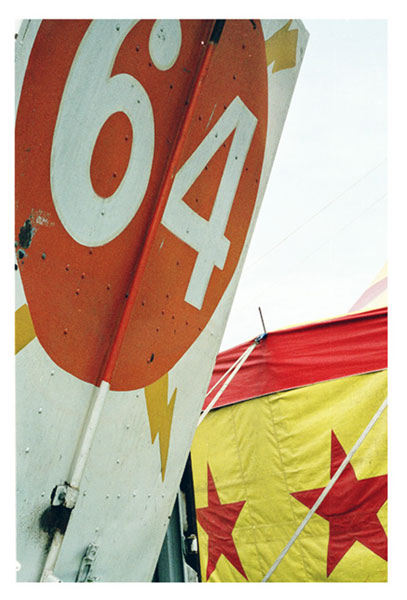 INTERVIEW WITH LIZA COWAN AT THE BLOG "EPHEMERA"

Ephemera is one of my favorite blogs. The impressario (host/blogster)  Marty Weil interviewed me recently and the post went up today. Check it out, and keep it bookmarked because there's always something fascinating going on there for all of you ephemera lovers.

"One of the ways I use ephemera differently than many people is that I work a lot with details. I love to see what happens when a small portion of the item is isolated and enlarged, so you will often see details on my blog and in the reprints. My photography is often about small abstracted details of larger objects, so it's not a big stretch to see how I come to love the abstracted details of printed images. "

One of my favorite artists, W. David Powell, is now showing at Pine Street Art Works. David and I share a love of vernacular images, scientific and advertising ephemera, and new ways to look at and incorporate cultural detritus in new art. 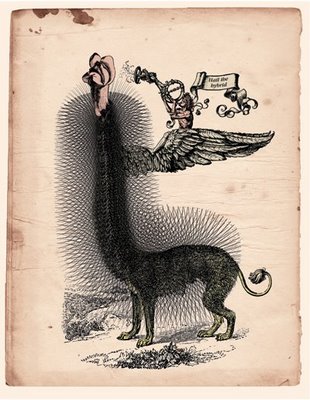 W. David Powell, Hail To The Hybrid, used by permission of the artist. W. David Powell. Machine For Manufacturing Beauty. Used by permission of the artist

Most of the pieces in the show "were constructed in Photoshop from diverse source materials that range from Anton Mesmer's noteboooks, Maxwell's electrical diagrams to phrenological, physiological and geological texts. Numerous other books as well as images from contemporary medical imagers technology provide further material for creating combinations that invite new interpretation and analysis. The use of digital montage has become my primary medium for art making, though I sometimes use old cut-and-paste methodology along with traditional drawing and painting tools. The beauty of the digital medium for me is that it can become just another tool in my art kit. It does not necessarily replace traditional media, it just augments them." W. David Powell. 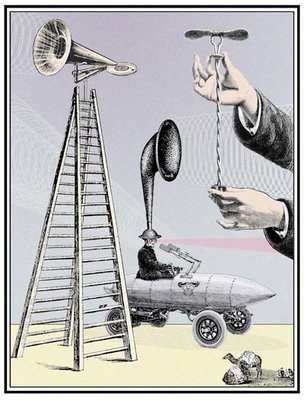