NOBODY MAKES ME HAPPIER

New York City artist TMNK - The Me Nobody Knows - is a gift that just keeps on giving. It's old news that I have a big art crush on Nobody but I'm surprising even myself that his work is just that good. By good I mean many things but mostly it's that Nobody's work just keeps taking my breath away and making me smile. Not in a sappy way, but a deep down visually and intellectually satisfied way. Nobody makes me happier. I get to look at great art while maintaining my obsession with this election. Obama => Art. Art => Obama. 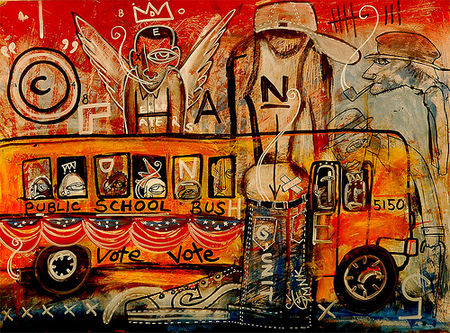 "With days left, the people have begun to board the bus for change. Each candidate promising a better tomorrow in this gothic novel of epic proportions. Obama seemingly cast as our new guardian angel. Well remember, we make our own heaven or hell by the choices we make. This election has energized a nation to head to the polls on November 4th. Together ordinary people of all races and religions are coming together to make a difference. Next stop an election booth near you; get on the bus! Get On The Bus" TMNK

TMNK will be at Pine Street Art Works in Burlington, VT next September for Art Hop, our wonderful annual art festival.  But before then we've got an election to win, and an economy to get back on track - so get on out there and vote, and drag everyone else along with you. Obama Or Else. .

OBAMA IN MY WINDOW

It's a cold rainy day here in Burlington, VT, but I finally got my Obama T shirt and I had to put it in my shop window. 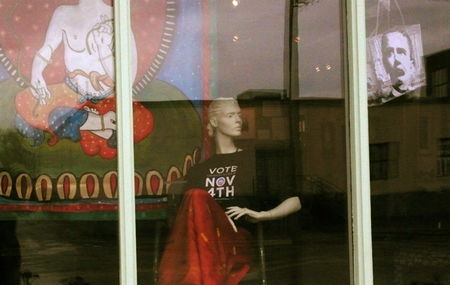 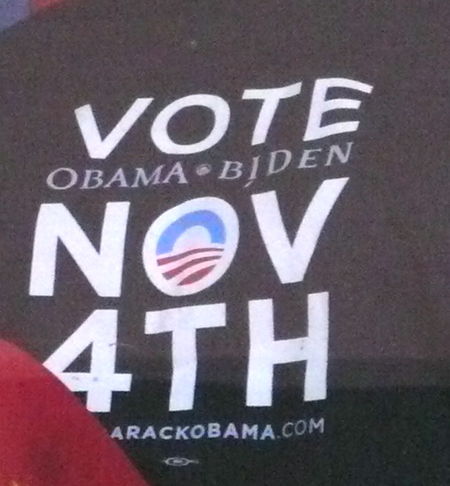 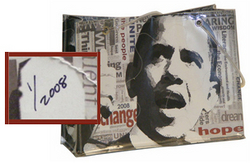 Limited edition Obama bag by Flashbags. Each bag is numbered. A substantial portion of each sale goes to the Obama Campaign. Order online directly from Flashbags or if you are in town, come by and buy one at Pine Street Art Works.

Two weeks to go until Nov. 4th, and I don't know about you, but I'm filled with a mixture of hope and anxiety. If Obama wins, well, the world will be a much better place. If he loses, there will be hell to pay. Obama says "do you want four more years of the same?" But I say a McCain/Palin presidency would be exponentially worse than we suffered with Bush.

So keep on making those calls, talk to your neighbors, do everything humanly possible in the next two weeks to make sure Obama wins.

Here in Burlington people are enthusiastic about Obama. Almost everyone who comes into Pine Street Art Works is delighted to take some of my Obama Or Else postcards, or some buy an Obama bag by  Flashbags. A few people have been politely not interested. No fights, no arguments. Just lots of, "what are you doing to help? Any suggestions of what I can do to help? and "here's what I've been doing to help."

But a few stores where I've asked if I could leave some Obama cards have said, "well, we can't afford to alienate our clients or customers who support McCain." Maybe it just shows that I'm not that great at business, but my response is, "Bite Me!" I'd rather lose the business than not show my support for Obama and sane government. 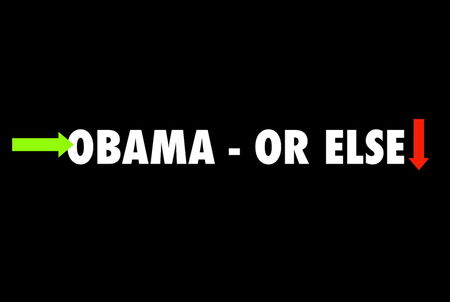 Oh, and this is the painting that is also in the window. It's my variation on a Tibetan Buddhist White Tara. I painted it about 4 or 5 years ago, and it's in the window because right now I am showing photos from Tibet taken just before the Chinese takeover. The photographs are by Heinrich Harrer, who wrote Seven Years In Tibet. 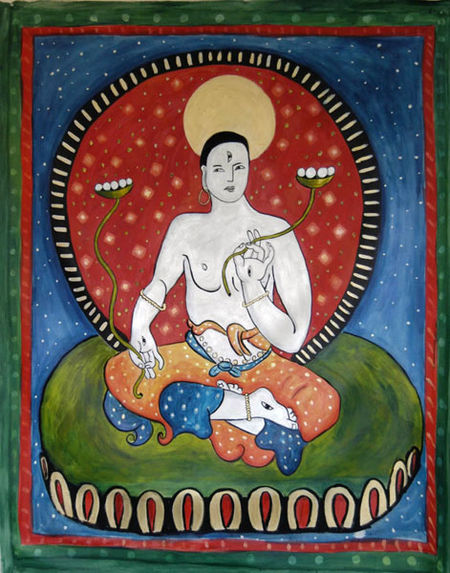 NOBODY DOES IT BETTER

What are the chances that I have a huge old art crush on NOBODY? Yeah, pretty much so. If you've been following me on this blog you know I found NOBODY aka TMNK -The Me Nobody Knows - when I was researching artists who are making art about Obama. When I found NOBODY I fell in love with his work and asked him to have a show at Pine Street Art Works and he said yes. So, yes, I'm promoting him now as one of "my" artists.

I love most of the artists I show at Pine Street Art Works, and I love them all for different reasons. Cara Barer, Nakki Goranin, Steve Goodman, Amadou Sow. Denis Versweyveld, Alison Bechdel, Connie Imboden, Phranc, Aline Smithson. Yeah, I'm crazy about all of them, which is what makes it such fun to do my job.

But right now my art heart goes pitterpat for NOBODY. Maybe because he speaks to my politics in a time that politics is all I can think about. But also because he's just so amazingly good. On his blog now he's posted some sketches he made on the NYC subway. I say NOBODY is as good as Saul Steinberg and Jean Cocteau and Picasso. Yes, I said Picasso.

Check out these sketches. TMNK - The Me Nobody Knows - copyright TMNK. Used by permission of the artist.

NOBODY says : "I had only hoped it was possible nearly a year ago to find something that gave me joy in my heart. What I found was so much more: As I made my way each day to the corporate playground of great thinking and ideas (Madison Avenue), hurt and angry that diversity was a myth, I began to sketch commuters, giving most away as gifts. To see their smiling faces gave this nobody’s spirit a lift.

Stressed beyond comprehension, I took a few days off, and searched my soul for answers. How was I going to take care of myself and my family? Then a thought from where, I cant explain, suddenly became implanted in my brain. God gave me all these talents, their greatest use was not for self, if I trust in God (faith), and do my best, and TRIED TO HELP SOMEBODY ELSE, I’d find my greatest wealth.

Its been almost a year, WE did it, and now I see the light. That voice I heard inside my head was God telling me the purpose of my life."

And pay attention to NOBODY's paintings, too. I've had two of them hanging in the gallery for a couple of weeks now and my vistors are excited. They love to search the words to decipher all the multiple meanings, and thrill at the color and composition. I don't own this one, but I love it. 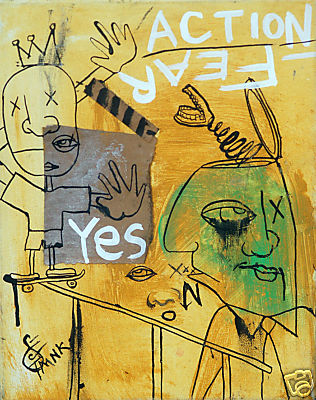 TMNK -The Me Nobody Knows. image copyright TMNK, used by permission of the artist.

Here at Pine Street Art Works in Burlington, VT, we have some amazing shows lined up. People often ask how far in advance I book shows, and the answer is anywhere from a couple of months to a year. I like to have some flexibility and I also like to know where I'm headed.

So here are three upcoming shows to look forward to: 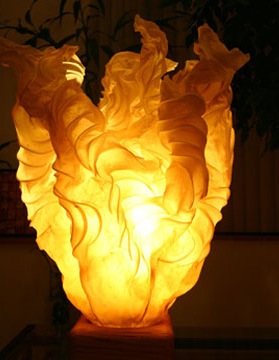 Illuminated Sculpture by Riki Moss and Robert Ostermeyer. Used by permission of the artist.

I've scheduled a show of light. Yes, the days are getting shorter and we all start to crave illumination. Heading towards Winter Solstice, dozens of  important traditions worldwide honor the return of the light and have done so since the dawn of human life.

Well, we're jumping in a bit early with a show of lights by Studio Glow - the light sculpture studio of Riki Moss and Robert Ostermeyer. The whole gallery will be aglow with these beautiful lamps and lights. 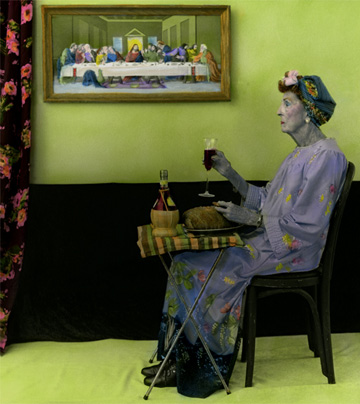 Aline Smithson, from the series, Arrangement In Green And Black: Portrait of the Photographer's Mother. Used by permission of the artist.

I had the great pleasure of meeting Aline Smithson on my last trip to Los Angeles. I'd only seen her work online, which is how I find a lot of my artists, by the way. And I'd quite fallen for her photography. Aline is a highly respected photographer and teacher and a great person to go to art galleries with. We had a blast looking at art together. I'm so excited about presenting her work in August, and I will be blogging a lot more about her. Meanwhile, I urge you to check out her website - linked above. 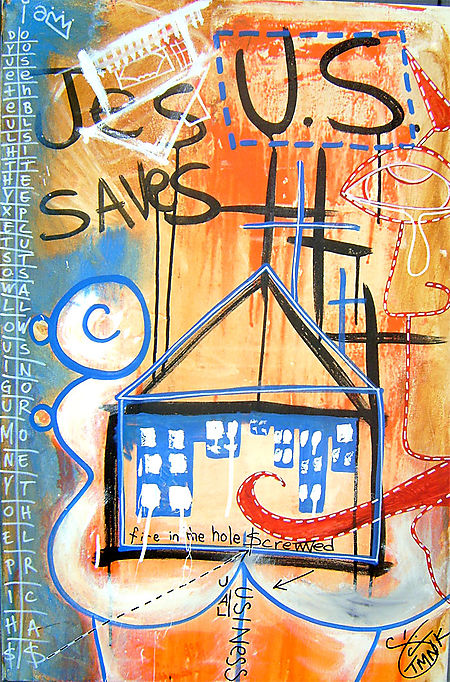 TMNK - The Me Nobody Knows - Save My Ass Too, used by permission of the artist. Mixed media on canvas.

"Some of the wealthiest, most powerful money brokers screw-up and you say you want to use my money to bail them out? They make millions, hundreds of millions, fly first class, live in mansions, and have yachts. Yet we, the poor-ass-struggling folks are about to loan them 770 billion dollars?
I have a better solution. Let the greedy idiots who caused this mess take their lumps and loose everything. Then do for the American people what we do for developing third world nations, simply forgive our debts. Bail us out. Keep all of us from going bankrupt, and pay our bills, our homes off. After all we're the backbone of the nation, right? Good, for once let those at the top of the mess suffer the consequences.
Now you've already wasted a bunch of my money looking for weapons of mass destruction, then starting a very expensive war, funded again with MY money. So the way I figure, if you really care about a nobody like me: Dear Uncle Sam, Save My Ass Too! Save My Ass Too" TMNK

TMNK- The Me Nobody Knows.  September.

If you've been following my series Picture The Future: Obama in Art, you've seen two of Nobody's paintings. I found New York City artist TMNK as I was researching for this series and, as I said in one of my posts, I've fallen in love with him. With his work. We haven't met yet. But...here's the best part of my job - I wrote and asked Nobody to do a solo show here at Pine Street Art Works next September for Art Hop. And he agreed! Sometimes I love my job so much. Follow the link to Nobody's website and blog and I think you will be as excited about his work as I am.